Butzi is a friend, a magician, a keynote speaker and (now) an author. I’ve just finished his first book, in which he introduces a concept he’s quite passionate about: “crazitivity.” Take it as a mantra, a way of looking at life; not as a theoretical concept or method (even though Butzi says it’s a brainstorming technique) to come up with better ideas.

Butzi – real name Johannes Alinhac – uses the 150 pages of his book to make a point about the importance of creative self-confidence and the value of following one’s instincts. What makes the book powerful and interesting is that he is a living proof of what he writes. He shares many anecdotes about ideating for his magic tricks and freaking out when he first presented them to his audiences, from his parents to major corporate clients… This is what I found most impactful to bring his message across. 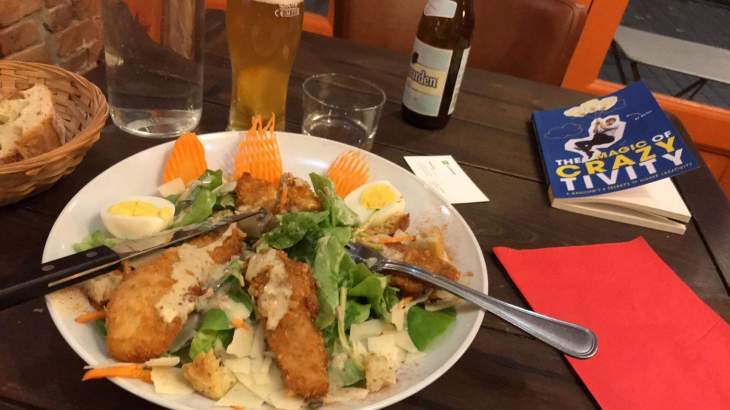 I was a bit frustrated by the first pages because there are no definitions of the key concepts – creativity and magic – and there is little framing to make the reader understand why they are important and why I should care.

What does each concept mean and how do they possibly relate to each other? Why are they worth writing a book about? How can I benefit from it? Has anyone ever come up with a concept that is similar to “crazitivity”?

This is what I was taught when I was an academic, and I therefore expected the book to start like that… There isn’t a definition of “crazitivity” neither, you just find out later in the book that it is somewhere between a personal ideation method and an attitude towards life.

But this isn’t a book written by a teacher or a researcher. It’s more of a manifesto, like the ones Seth Godin writes, to encourage people to look at the world differently and to get up and do sh*t instead of complaining about circumstances.

It’s a call for everyone to believe in her/his own ideas and not kill them as soon as they appear. One way to put it is…

The original idea dates 30 years back, when Wieden+Kennedy first aired this ad with the “JUST DO IT.” slogan for Nike in 1988. The three words came to my mind many times when reflecting about Butzi’s book.

Butzi wants you to just go ahead and ideate, create, take the plunge. He is passionate about ideas and their execution, however childish or crazy they may be, and he repeats it many times throughout the 7 chapters. Sometimes as rallying cries, sometimes as tips, sometimes as personal anecdotes – which is what I prefered.

In Butzi’s book, you’ll read things like “My clown teacher used to say…” or “when I was 16 years old [I] I trained [judo] in Japan for a month” or “when I [was] a resident magician in a nice coastal town in Ecuador.”

Now you may wonder how all this is useful to the reader? Is it just personal branding? It is not because Butzi illustrates his “crazitivity” concept with these pieces of personal experience.

What the clown teacher told him is “Do something, anything, it doesn’t matter if it is bad“; the judo training camp illustrates how he almost gave up the sport because of the difficulty in Japan but came back to France much stronger despite the feeling of being a total looser; and the Ecuador experience taught him how to better deal with negative feedback and rejection.

Many other aspects are covered in the book, from taking inspiration from objects and daily life situations to coming up with tailored ways to animate corporate workshops for clients with tricky briefs (olive oil, toothbrushes… he’ll take it!). You should find out about them for yourself.

Or you may watch this talk (in French) that Butzi gave recently:

Overall, “The Magic of Crazytivity: A Magician’s 7 secrets to Higher Creativity” is a testimonial, at least that’s what I liked most about it. Throughout the pages, the pendulum swings from creativity tips for managers to personal stories about failure, fear and rejection, allowing us to read the mind of a magician (a bit).

It’s the latter that is unique. Everyone has written about creativity, innovation and how they are important to personal and professional success. Butzi himself has read extensively about it. Many biographies have been published about entrepreneurs whose crazitivity led them to breakthroughs, post-rationalizing every single decision they took in their lives.

But few personal accounts illustrate how creative activity and self-confidence can help someone start making a living and build a successful business. In an age where the Millennial generation is increasingly looking to combine personal fulfillment with professional success, this is a rare example of someone who is getting there.

Yet I didn’t – and still don’t – feel the need to be crazy or creative to succeed in life. I think everyone finds her/his own drivers and there are no recipes that can apply to everyone. Don’t expect to find any of this in Butzi’s book.

But the humor, wit, optimism and passion that you can feel when flipping through the pages are certainly part of striving for a fulfilling life.

PS: I’m a marketer and there’s nothing better than a good old call-to-action…