A couple of months ago, I blogged about community brands (not brand communities, which tend to have three distinct traits: (1) members share rituals or traditions, (2) there’s a sense of community, of belonging to a special group so that (3) community members feel morally obliged to help each other). A community brand uses the inverse approach: they emerge from spontaneaous and informal movements, mainly because they grow and gain visibility, so that they have to adopt some kind of unique identity (Cova, Louyot-Gallicher & Bonnemaizon, 2011). Examples are the Slow Food movement, the Burning Man festival or the Couchsurfing community. 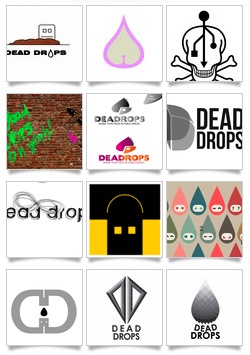 I noticed a couple of crowdsourcing contests recently which do not serve SMEs nor major brands, but such ‘movements’. The Berlin-based platform Jovoto asked its community to illustrate the Dead Drops movement by coming up with a logo for it. They partnered up with institutional partners to set up another contest to come up with a universal Human Rights Logo. The Dutch platform Redesignme launched a logo design contest to differentiate crowdsourcing from co-creation.

But what bugs me is that these initiatives are taken by third parties. Do “private” communities have enough credibility to generate a legitimate symbol for a community or a mouvement? They definitely have the creative talent (the submissions for Dead Drops are awesome!), but who’ll use them anyway?

On its contest page, Redesignme states that the contest is purely illustrative and gives designers an “opportunity to get feedback on designs and get a lot of exposure of your work!“. I doubt that alot of people who participate in crowdsourcing initiatives care about marketing theory, do they? The winning idea has been submitted by an experienced designer who likes to blog about these type of contests and their implications for designers. Not everyone has this curiosity and critical mindset. I still think that for such universal subjects, calling for entries at a single community doesn’t make sense, not if you aim to have it universally adopted!

The most credible initiative, I guess, is the Human Rights Logo Initiative. I am surprised that Google is the only “big” corporate partner; the jury being composed by prestigious names such as Muhammad Yunus, Ai Weiwei, Jimmy Carter or Aung San Suu Ki. Victim of its success, the platform already received more than 11,700 submissions, five days before the deadline! Here’s another downside of crowdsourcing: the sheer amount of ideas that a good brief generates… but let’s not be negative. I personnaly think that we could even get very interesting insights about peoples’ perception of human rights all over the world. Jovoto, will you conduct a semiotic analysisof all that?