Yochai Benkler, author of The Wealth Of Networks

After Danone, Heineken and Coca-Cola, who all have fairly different approches to engage consumers via de internet, this post is about the German conglomerate Siemens. Siemens does A LOT of things: from consumer products to communication networks, from healthcare to financial solutions, from lighting to hearing solutions… quite a lot of potential to co-create upon! Siemens sttarted with an internal knowledge management system called ShareNet in 2002, let’s now have a look at how Siemens pilots its innovation efforts by opening up to external knowlegde.

Since it’s foundation by Werner von Siemens in 1847, when the “Telegraphen-Bauanstalt von Siemens & Halske” was created to offer an alternative to traditional telegraphs, Siemens has grown into a multi-activity conglomerate which manages a wide diversity of businesses. Core-competency is still engineering, though, and that’s where Siemens’ co-creative efforts are most important. And according to Frank Piller, Siemens started its first open innovation initiatives in 2008 with an idea contest for Fujitsu-Siemens Computers about data centers and then in 2009 with an idea-contest called LED Emotionalize your light. Actuallythe latter wasn’t branded Siemens but rather OSRAM, the company-owned brand that develops lighting products. As Frank Piller says, “with the help of this platform […] OSRAM (respectively Siemens) deliberately considers the creativity of customers and actively integrates them into the development of new products“, which shows that the objective was clearly innovation-focused (actually it was also a research-project, as a lot of Hyve’s projects). For those who are interested: the website is still live and you can see everyone’s ideas (which is not the case for the data center contest). Since then, OSRAM and Fujitsu have been spun off from Siemens’ brand portfolio and the company’s activity got recentered around industrial equipement and urban infrastructure.

The homepage of an idea contest targetted towards students from the Middle-East (www.studentaward-middleeast.com)

Student challenges are very common today among big companies, I remember that in my business school we had the Henkel Innovation Challenge, Danone student ambassadors and Société Générale organized a game called Citizen Act. Siemens also targets students with two idea contests the have expired today: one asked students to come up with  ingenious energy grids than save, the other asked students to help build a city in the desert – with all the challenges that this implies (see above image). While you can already check out the winning ideas if the Smart Grid Contest here, the second contest’s winners have not yet been chosen; a jury will decide among  submissions from 400+ universities from the Middle-East, and winners will be offered internship opportunities within the company. But let’s take a look at a different co-creation initiative that Siemens initiated.

Excerpt of the presentation video (click on image to see video on Zooppa.com)

The above image is a screenshot of the presentation video of another type of open contest organized for Siemens – less technical, more inspirational. It’s all about asking people to tell stories around cities. On Zooppa.com, Siemens indeed sponsors a video challenge called “Changing Your City for The Better”, where it’s all about storytelling around sustainable cities. “Siemens is looking for human, journalistic, authentic stories – not commercials or industrial films. Your videos should be about everyday challenges of urban life“, the brief says. More than 100 videos have been submitted… I like this one a lot (of course!): 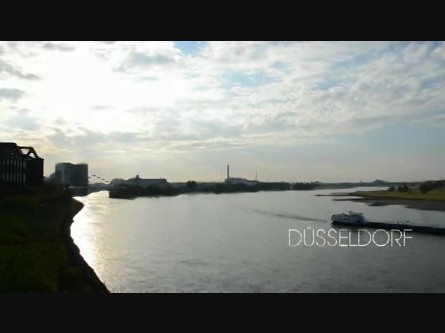 Not only do I love this video because it’s one of the few out-of-US videos that have been uploaded to Zooppa for this contest, but also because I know a lot of the places Elias rides in! It’s also beautiful, inspirational and could potentially help Siemens realize how much people want to move on bikes – and to add electric bike equipment to their Mobility business, with batteries for example? To finish this post, let’s get back to innovation. A report highlights the following trends among new product development (NPD) professionnals:

As the preceding graphs highlights, openness is clearly a trend in innovation. The above report has been written by HBR’s Analytic Services and has been sponsored by Siemens’ Product Lifecycle Management (PLM) division. In the sponsor’s perspective at the end of the report, the President and CTO says that “[People at Siemens PLM Software are] focused on helping our customers manage and understand all of the complexity surrounding their products and processes so that they can quickly get to the right information, in the right context“.  Even though openness and external idea aquisition seems to be key in the future, the end-consumer is not mentionned here. Same in figure 5 above. Obviously open innovation and co-creation did not reach every division within Siemens…

I hope that helped you out there, don’t hesitate to comment or give details!