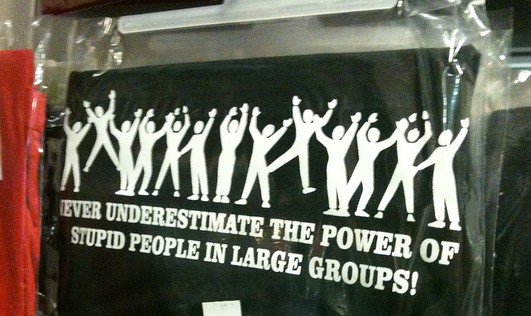 A couple of weeks ago, I attended an interesting conference by Geoff Mulgan about social innovation. Before leaving, I briefly asked him what he thought about the Open Innovation pendant of social innovation, and he replied in substance that “it’s an interesting approach, but it hasn’t made its proofs on the large scale. Also, there nothing out there about failed co-creative initiatives, which is nots“. And indeed, there’s not a lot of self-criticism among co-creation / crowdsourcing / open innovation actors, which – I think – would be a wise and healthy initiative. Before waiting this to happen, let’s take a look at some unfortunate initiatives… and see how these cases can improve co-creation efforts.

ON THE SIDE OF THE COMMUNITY: HOW TO UPSET PARTICIPANTS

In a post called Four Surefire Ways to Ruin Your Next Crowdsourcing Project, the CEO of the crowdsourced based language translation company Lingotek gives tips for successful crowdsourcing: define clear objectives and provide them with manageable tasks, engage participants over time and give them feedback, and motivate them properly by appropriate recognition/incentives. This is not always the case. Some (anonymized) quotes of participants allow us to see what might upsets co-creators.

I see this contest comes from [platform] itself, I guess they’re a little low on challenges right now…

Unbranded contests are quite common on platforms which want to keep a community stimulated and active. Jovoto has a series of contests called Open Zone, for which there’s no prize money but an obvious social emphasis. This seems to work pretty well as soon as you manage to deliberately target and involve altruistic members. But the above quote shows that not all participants are motivated to partake in such challenges. Therefore: the more you call upon people’s good will and altruism, the more transparent and honnest you should be about the contest.

Why does the brief link to [link to video] when the winner does something completelly different? Or has the video been chosen because of the number of votes/likes it received (which wasn’t announced in the brief) ?

It’s not rare to receive mad messages from angry members who were not chosen as winner… but when their complaints are justified, you are to blame. Having a clear task definition is crucial, and choosing the winner according to the brief is a no-brainer… However, the clients whant to be free when it come to choosing the winner; they pay for the campaign, so they decide who wins! Here, co-creation facilitators have to act as credible intermediaries between a demanding community and a decisionary client.

In extension to the previous paragraph, it is also crucial for the platform to handle paperwork, and more importantly, legal issues. While the community invests time and creative energy in a project (and the brand also), the role of an intermediary is to provide a functional platform and a legal framework that works for everyone. If it’s not possible to prevent any type of problem that can arise, it’s possible to rely on the community to do so. Quirky says that “community protection is just as good as any legal document”… risky assumption.

ON THE SIDE OF THE COMPANY: GETTING DECEIVING RESULTS

But co-creative engagement, as valuable as it can be, can also bear risks for companies. I think this is essentially linked to the fact the companies still like to stay in control when engaging with consumers, which is contrary to the principles of equal-to-equal dialogue. Hence, when consumers get the chance to really have their say, they might want to take the mickey out of the company… as it happened in Australia with Vegemite. 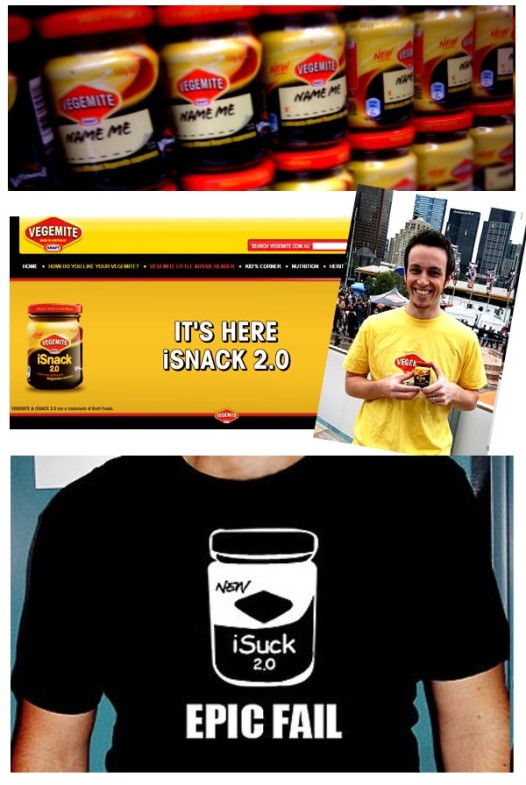 A participative & web-based campaign, a funny name voted-up, a lucky winner… but a damaged brand

In 2009, Kraft indeed wanted to involve consumers in the rewamp of Vegemite with a public competition that gathered more than 48,000 suggestions from consumers. A 27-year old webdesigner called Dean Robbins obviously made the funniest proposition with its iSnack2.0 and ultimately won the vote (even though other funny names like Ruddymite or Wow Chow came up close to the winner). Even though Kraft first said that “the name Vegemite iSnack2.0 was chosen based on its personal call to action, relevance to snacking and clear identification of a new and different Vegemite“, they eventually withdrew the new product because “The new name has simply not resonated with Australians – particularly the modern technical aspects associated with it“. Whether it was good or bad PR for Kraft is not clear to me… but I like this conclusion from igloodigital:

An interesting comment about this type of actions is brought in by Stephen Shapiro, who says that this type of open call for opinion might be more interesting to eliminate stupid solutions than to generate intelligent ones. By illustrating it with a personal example and and MyIdea4CA, he thinks that peoples’ self-interest is higher than the interest of the group. In an interesting paper about rating-scales, the authors have a great way to put that: “[The] key problem of the ‘wisdom of crowds’ is the inability to distinguish between the ‘wisdom of the crowd’ and ‘the mob that rules’. ”

There are probably a lot of other failures of that kind, anf I’d be glad to see you contribute in the comments section! To conclude this post, I’d like to highlight some academic papers that talk about the difficulties of crowdsourcing or co-creation.

I already wrote about some cases, like the failure of the crowdsourcing-platform Crowdspirit, and tried to think about reasons for this failure. Also, two papers recently appeared about “value co-destruction” as opposed to value co-creation: one that is purely conceptual, the other that is based on empirical data (have you ever been amazed by bus drivers’ rudeness? That’s the data we’re talking about here 😉 ). In other words, these two articles suggest that the interactions between consumers and producers might also be destructive!

In the same vein, as Atizo shared, researchers warn about the negative side effects of customer integration (pdf). It is clear that a company can’t outsource everything to consumers just because the technical platforms exist. The first point “Dependence on customers’ interests”, and the last on “Loss of know-how” are particularly interesting as they came up in an of Bernard Cova (that I’ll publish shortly). Based on an example that he knows particularly well, he told me that…

As soon as you open your processes to the outside, you open some kind of pandora box. [The company’s] employees wanted to discuss topics, but consumers where interested in others

if co-creation finally turns out to work well, some employees can feel dispossessed. What is the brand manager’s role if everyone has a word to say about branding?

Stay tuned for further insights and the whole interview of Bernard Cova on this blog. To get back to the drawbacks of co-creation: companies must carefully assess their needs before blindly engage in co-creation. The best way to get this wisdom is to hear about real cases and to draw lessons from it. Can you think of cases where co-creation turned sour in a way? I’d love to have your thoughts !

UPDATE from June 27th: Nice article about the dangers of crowdsourcing by J. Füller (in German) Die Gefahren des Crowdsourcing