The Jawbone UP is a gadget. It’s a bracelet that tracks all your movements: steps, sleep etc. The smartphone app is supposed to do the rest, like analyze your activity, save your meals and tell you what is best to live a healthier life. For those who prefer to watch it in a video, check out Jawbone’s official video for the UP. The most popular comment of the YouTube video is full of common sense: “Give me a break. If humans need an app to do this, we’re in more trouble than I thought“. However, I wanted to try it, and I think the Jawbone UP has a lot of potential. I received it a couple of weeks ago and, as Cliff Kuang puts it in his Fast.Co.Design post, it’s a failure! It is a failure today, with the current application and the undeniable flaws that can’t be corrected anymore. But it could become an awesome product, similarly to the iPhone. Here’s what I think of it today… and how I think it could be improved to become really useful.

The wristband alone costs 100$. Quite a lot of money, no doubt about that. But the promise of Jawbone that it offers a non-intrusive way to track your activity, to record your meals, to analyze your sleep cycles and even to wake you up when your sleep is in a light cycle. Very promising stuff. After 2 weeks of use, here are my pros and cons of the current UP:

What’s great: The idea and the design

These screenshots show what you do to start & end a workout. That day, I ran about 50 minutes, with 3 series of push-ups, perfectly tracked by the wristband. Even the distance is correct, which is astonishing given the fact that it isn’t GPS-based, but only counts your steps!

What definitely sucks: The wristband’s flaws

What Jawbone can improve (making it so promising): The software

The UP nails the idea of a physical presence, but fails in creating an app that becomes a virtual companion that rewards constant attention 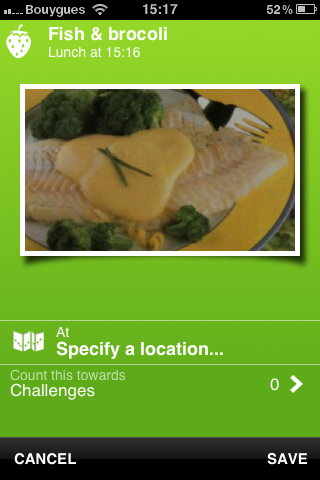 … this surprising email received this week !

My feedback is not very bad, I think it’s quite constructive actually. It seems that the UP band has generated quite some disappointment, though. Three days ago, all UP bad owner received a surprising email from Jawbone’s CEO, Hosain Rahman.

It says that “We regret any disappointment we’ve created for our community of users  (…). The fact that you’ve taken the time to talk with us and help us make a better product is simply phenomenal. (…) Please know that we’re doing – and will continue to do – everything we can to make things right. This is just the beginning for UP and we are excited to keep improving“. Obviously, the feedback is quite bad, and the people from Jawbone know how much a satisfide community of users is crucial! Then, with a link to http://jawbone.com/UPrefund, they tell us that all UP bands bought in 2011 can be refunded!

“For whatever reason (…) you can receive a full refund for UP. This is true even if you decide to keep your UP band. We are so committed to this product that we’re offering you the option of using it for free. (…) For most of you, this program is simply meant to offer peace of mind”

This is a werid move, but it’s courageous! Improve the UP, Jawbone, and you’ll something very powerful, trust me!

UPDATE FROM DECEMBER 19th: About a week afterfirst publication of this post, my UP stopped working (won’t sync with the iPhone anymore). Unless Jawbone fixes the current flaws, I see it as very likely that I won’t use it anymore… Sad ending.