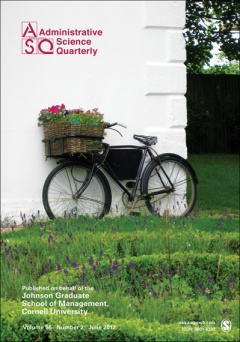 The cover of an ASQ issue from 2012, which I chose only because of the bicycle

Here it is, my (our) first publication in a peer-reviewed management journal. We have just received our acceptance letter from Administrative Science Quarterly (ASQ), a prestigious quarterly journal that publishes the theoretical and empirical papers on organizational studies, for our paper “How Culture Impacts Creativity: Cultural Tightness, Cultural Distance, and Global Creative Work.”

To make it short, the paper looks at the effect of culture (the extent to which countries have strong cultural norms and enforce them strictly) on peoples’ likelihood to participate in, and succeed at, global creative tasks. It advances a new theoretical model, the “Cultural Alignment Model of Global Creativity,” to understand how culture impacts creativity in a global context.

Here’s a bit more about the paper, and about the publication process – which I went through for the first time.

This paper is a collaborative project with Roy Chua, Associate Professor of Organizational Behavior and Human Resources at the Lee Kong Chian School of Business in Singapore, and Jean-François Lemoine, Professor of Marketing at Université Paris 1 Panthéon Sorbonne and ESSCA Ecole de Management. We first got in touch with Roy over 3 years ago to discuss one of his papers, which looked at the impact of prior experience on creative performance, and we had some interesting discussions about promising research areas that were not addressed in academia to date. Then we started to work on a common project.

After quite a bit of back and forth, discussions and explanations, we found some sugnificant results that had high theoretical value. To make it short, we found that a particular cultural construct, cultural tightness – looseness had a significant impact on participation in creative crowdsourcing contests.

Singapore, a “tight” country with lots of rules!

We found that individuals from tight culture countries (countries which have many strongly enforced rules and little tolerance for deviance, like Singapore, Malaysia or India) are less likely to participate and win in creative crowdsourcing contests that targetted other countries than their own, while loose countries (countries which have few strongly enforced rules and greater tolerance for deviance, like Ukraine, Estonia or Hungary) are more likely to do so. Cultural distance between countries (how culturally different countries are) mediates this relationship, meaning that it’s even harder for people from tight cultures to participate and win contests that target culturally very different countries than theirs.

However, surprisingly, we also found that individuals from tight culture countries have a certain creativity advantage when they take part in contests that target their own country, both in terms of participation and winning. For example, Singapore is a “tight” country because of the many norms that rule peoples’ behavior and the high fines that you have to pay if you break them, and Turkey is another one. Our results mean that crowdsourcing contests that target tight culture countries like Singapore (like this one or this one) or Turkey (like this one or this one), for example, are statistically more likely to be won by locals, presumably because they know the rules and norms better and adapt their creative ideas to them.

Beside the above, theoretically important results, here are some of the paper’s other significant results in short and less detailed than in the paper:

Here’s a real-world example that illustrates one of our results (the fact that individuals from tight culture countries have a creativity advantage when it comes to local contests, or contests that target their own country):

This video was the winning video of a contest for the Turkish branch of retailer Carrefour, called CarrefourSA. The contest was open to people from all over the world, and 77 people from 27 countries participates, but the winner came from Turkey. Baris Atiker, a graphic designer and educator from Istanbul, specialized in motion graphics and animation, created the animation that the brand liked most, rewarded, and eventually used for its anniversary brand campaign. A Turkish creator – coming from a tight culture – wins a contest for a Turkish brand, a local contest. This is a prototypical example of our results.

So we wrote a paper with these results, called it “Creativity Across Cultures: How Cultural Tightness Impacts Engagement And Success In Global Creative Work” and send it to ASQ in September 2013.  About a month later, we received a “revise & resubmit” from the journal, which means that we had to correct things and send it back to them within a year. One of the reviewer’s possitive comments was:

This paper […] takes a cutting edge concept in cultural research ­ and not only applies it to organizational creativity but really extends our understanding […]. The data reflects real business problem solving in the context of a current and increasingly important organizational form, crowdsourcing.  I think that makes it an excellent candidate for ASQ – (a reviewer)

We have been asked to improve a number of things, like underlining the theoretical novelty of our results (how did we really come up with something significantly new?) or digging deeper into the reasons why tight culture countries might give its residents a local creativity advantage. We have rewritten parts of the paper, reordered parts, conceptualized our theoretical findings in a model (the “Cultural Alignment Model of Global Creativity”), presented supplementary data from a qualitative study (interviews with experts) and submitted the second version back to ASQ in May 2014, now called “How Culture Impacts Creativity: Cultural Tightness, Cultural Distance, and Global Creative Work.“

Here’s a presentation of the project I did in June 2014 at the Creativity Marketing Center at ESCP Europe, in London, UK:

Note that in the video I do not mention the qualitative study based on expert interviews who assessed creative output and their relevance to a specific traget country, which we did for the revised version of the paper. On August 2014 we received the response from ASQ, telling us that we had done a thorough and good job with the extra analyses and data collection, one of the reviewers telling us:

This paper is a strong combination in that it’s tackling a current theoretical problem, tightness and creativity, ­ in a novel and expanding organizational context, crowdsourcing. I think that makes it an excellent candidate for ASQ – (the same reviewer)

So we were “provisionnaly accepted” which meant that, if we did a couple of minor changes to improve the paper further (it was still about the theoretical contribution), we would get the paper accepted in the journal. We worked on some (quite) substantial rewriting, on clarifying the theoretical contributions even further and on finding bullet-proof references for all claims and assertions made in the paper. A couple of days after submitting the 3rd version, we got our relief email:

The revision shows appropriate responsiveness to the reviewers’ final set of comments and makes a clear contribution to theory in the area of creativity across differing national cultures. Congratulations on your success – (the associate editor)

THE PAPER’S ABSTRACT AND EXCERPTS

Here is the paper’s abstract which is, for readers who are not familiar with academic papers, is the brief summary used to help the reader quickly ascertain the paper’s purpose:

Abstract – “There is increasing scholarly interest in how culture impacts creativity. This paper advances a new theoretical model to understand how culture impacts creativity in a global context. We theorize that creativity engagement and success depends on the cultural tightness (the extent to which a country is characterized by strong social norms and low tolerance for deviant behaviors) of both the innovator’s country and the audience’s country as well as the cultural distance between these two countries. Using field data from a global online creative crowdsourcing platform, we found that individuals from tight cultures are less likely than counterparts from loose cultures to engage in and succeed at foreign creative tasks; this effect is intensified as the cultural distance between the innovator and audience country increases. Additionally, tight cultures are less receptive toward foreign creative ideas. However, contrary to what current theorizing would predict, we found that in the cases of individuals doing creative work in their own or culturally close countries, cultural tightness increases the likelihood of engagement and success. Taken together, our findings expand current theorizing about how cultural tightness impacts creativity and demonstrate on how cultural norms impact creativity on a global scale. Theoretical and practical implications are discussed.“

Here are two excerpts from the paper, which I have taken from the last version of the paper (before acceptance). The first is a wrap-up of our results; the second is a paragraph about the theoretical contribution of our work:

Excerpt 1 – “Using data from a global crowdsourcing platform, we found that an individual from a tight culture is less likely than a counterpart from a loose culture to engage in and succeed at foreign creative tasks that are culturally distant. The greater the cultural distance, the stronger the negative impact of cultural tightness. Further, our results suggest that the tighter the culture of the audience country, the lower the likelihood of creativity success in that country for foreign entrants. In the case of local creative tasks, contrary to what current theorizing would predict, cultural tightness increases the likelihood of engagement and success. Taken together, these findings provide unprecedented demonstration on how cultural norms impact creativity on a global scale.“

Excerpt 2 – “The finding that the greater the cultural distance, the less likely one is to engage in and succeed at foreign creative tasks underscores the challenges in global creative work. Importantly, inherent in this finding is the theoretical underpinning that creativity engagement and success depends in part on whether there is some degree of cultural alignment between the innovator’s country and the audience country. Indeed, our unexpected finding that individuals from tighter cultures are more likely to engage and succeed in foreign creative tasks from culturally similar countries provides further support for this cultural proximity argument.”

LAST BUT NOT LEAST

Don’t hesitate to get in touch if you are interested in the paper, or if you want to discuss related topics that are worth being explored. You will soon be able to access the article on ASQ’s website, but be aware that the process can take months. If you are generally interested in the ASQ journal and its articles, you can follow ASQ on Twitter, follow their blog on WordPress, like them on Facebook, or subscribe to their email alerts. If you believe our article is worthwhile being cited, here’s the correct citation for it (I will update it as soon as we know more about the ASQ issue and page numbers):