Meet Matias Planas, a graphic designer and photographer from Argentina who also happens to be a member of the jovoto crowdsourcing platform. He just came back from a round-the-world trip where he met a lot of other creatives from the same community (I think this is awesome!). As Matias basically did in real life what I a have been doing for years for my PhD – which is to find out why creatives from across the world participate in crowdsourcing projects – I got in touch and asked him a couple of questions.

Back to the starting point: In summer 2013, jovoto launched a contest called “For Glory 2013” in which the platform asked creatives to show their unpublished masterpieces. “While [we] are working on bringing new and exciting projects to the platform, we would like to offer you an exciting outlet for your creativity! Show us and the other Community members what you’re busy working on aside from the jovoto projects!” the brief said.

There was no prize money offered, just a trip to Berlin (where jovoto is headquartered). The contest received 238 submissions, and Matias’ submission “My view of the world,” which shows a series of 12 beautiful travel photos, was elected as a winner by the community. As he and his girlfriend already planned a trip around the world, the jovoto team accomodated with his plans and allowed him to integrate the trip to Berlin in his initial journey. Jovoto shared some updates about his trip (here and here), and recently tweeted that he was back home.

Our globetrotter Matias is back home in Argentina, but not before sharing some news with us http://t.co/n13PYSmUHy #jovotans

As I said, beyond what jovoto shared, I was very curious to know more about his project and the experience that he had meeting all these people from across the world. He was kind enough to reply extensively to a couple of questions. Read them below (note that links, emphases and quotes have been added by myself):

Matias, could you briefly present yourself?

Hi there! My name is Matias Planas, I’m a 35 year-old graphic designer and photographer from Argentina. My absolute passion is ART, no doubt. I just love art, creativity (in every single form) and life in general! 😉 You can see something of my work here www.matiasplanas.com.ar.

Why do you originally participate in jovoto?

I began participating in jovoto because I had come back to Argentina after a long (perfect) trip and I had nothing, no money, no job, nothing. I was a bit confused and in some kind of a crisis actually… After a couple of participations and understanding of how jovoto worked, I found that it was a great place to create and to do the things that I loved to do: design, photography, advertisement, creativity. I found a space to express myself and do whatever I want to. Since then I never quit it. To me it is a perfect place to keep creating and being with people who have similar interests.

How did you come up with the idea of the trip?

I LOVE travelling, and after one big, far, long trip you can’t stop. It’s a door that you open but you cannot close. The thing is that, at that moment, I was living in Australia with my girlfriend and there was an interesting contest where you could upload any of your personal work. So, I did it. I uploaded my travelling photographs and I won the first prize which was a flight ticket to visit the jovoto HQs in Berlin.

But we are creative and we always try to do something else 😉 So I emailed jovoto telling them that I had a trip planned already (around Sri Lanka and India and then South America), so, if they wanted to support my travel and my art would be great to have the money instead of the flight ticket. Of course, they agreed.

That was an great pretext to go to Europe and Africa and visit every continent in the world. The idea to visit “Jovotans” while travelling came right away. It was just perfect.

What did you learn about creatives across the world?

This is a great question. Of course I must say that I didn’t meet everyone, actually just a few, but the people I met they were just excellent. There was something in common between us, a kind of complicity, or magic, or something else. And I understood after a while that we are artists, and as artists (and humans) we really need spaces to express our creativity, to experiment, to meet people, to think, to challenge us, to play.

As artists (and humans) we really need spaces to express our creativity, to experiment, to meet people, to play.

And it was wonderful because after talking with each Jovotan I understood that behind participating and behind each tiny avatar there was (and is) a real person with a huge and interesting history, with different motivations (a lot of them truly touching). So, for us, jovoto really is a truly personal space to be and at the same time a kind of meeting point with many other people with a similar curiosity and similar interests.

Do you have a fun or interesting story to share?

My first visit to a Jovotan was a guy from India and I remember I was very excited. I emailed him asking if he was interested in a meeting and after a couple of days he replied that he wasn’t living in India at that very moment, but that I was still welcome to visit his family. It sounded great, and a bit strange at first but, of course, travelling also means doing different, unexpected things. It was an excellent opportunity to break that tourist-local barrier, I thought. So we went. 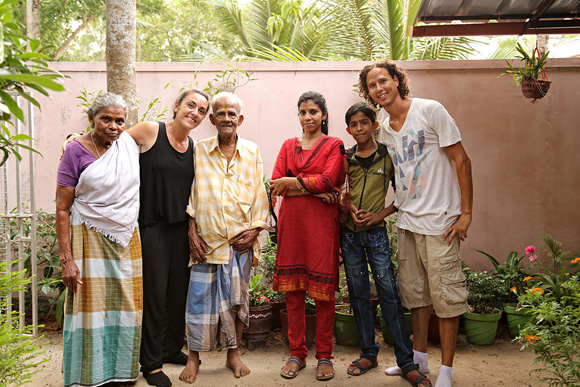 With my girlfriend we went to his house and his son and then his wife received us, they were as surprised as us. And then his parents also came and later many neighbors as well. It was going to be a personal meeting with a colleague but suddenly it turned into a big meeting in the other part of the world with many curious, lovely, smiling people in a kind of interesting intercultural exchange between two far away cultures. It was so different and so real…

Thanks so much Matias!

That sounded like a fantastic experience, Matias! In my thesis I also found that people who participate on crowdsourcing platforms like jovoto or eYeka come from all over the world (check my “Creatives in the Crowd” map, which features Matias since April 2014 already). Creative activity across cultures is heterogeneous, and what I love is that Matias found out about this diversity in real-life, not through data crunching and/or surveys. Congrats Matias for your journey, and congrats to jovoto for their vibrant community. Oh, and by the way Matias, feel free to join eYeka too, many creators love eYeka 🙂