A couple of weeks ago, I noticed that the Coasting-website (coasting.com) was not online anymore and that the landing page was Shimano’s corporate website, Shimano.com. Just before writing this, I googled it again and there is shimanocoasting.com again, on the bottom of the page, just behind the link to my blog post (results may vary from country to country) ! Did I make a mistake, in March, when I was looking for the website ? Did I just miss it ?

But more interestingly, what bugs me is : What caused the Coasting program to fail ?

Looks cool, but didn't sell. Why ? (photo from ohgizmo.com)

In a very interesting guest post on BicycleDesign.net, designer Mark Sanders basically talks about the cycling market as bunch of companies which sell high-priced bicycles to enthusiast cyclists (he calls them red oceans of enthusiasts). On the other hand, you have the mass-merchandisers selling very low-priced bikes in chain stores and supermarkets, targeting the mass of shoppers. Since these two approaches make companies compete on very “crowded” markets with low margins, we can indeed talk about red oceans that Kim & Mauborgne’s describe in their theory on business strategy, the Blue Ocean Strategy. In this theory, companies achieve growth by creating innovative ways to satisfy customers’ needs (differentiation), thus avoiding the high costs that incurr in highly competitive markets, and also driving up value for these customers. So is the cycling industry an unattractive industry ? According to Sanders, yes. I also think about an interview (in Institutional Investor of April 2005) of Martin Schwartz, CEO of Dorel Industries that I read when I got interested in Schwinn’s history ; he says that “bikes, it’s true, is not a great industry, but someone has to be the best, and Pacific (bike division of Dorel, ed) is the best by far“. Shimano seemed to having recognized that, and that’s where the industry-giant worked with IDEO, a global design consulting firm, to find a solution : Coasting. 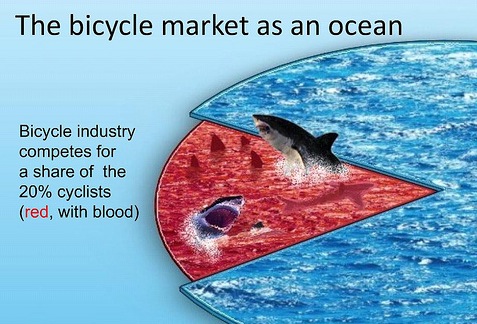 The previous paragraph relates to both the Blue Ocean theory (2005) and the Design Thinking theory (2008) to describe Shimano’s initiative. IDEO is even run by the guy who wrote the HBR-article on Design Thinking, Tim Brown. So Shimano was basically advised by one of the leading strategists in the world, but about 3 years after the lauch of the Coasting product-line, the program was abandoned because it didn’t generate the expected commercial success that Shimano hoped for. The program thrilled the design-community (California Design Biennal Award for Giant in 2007, International Design Excellence Award in 2008), was praised by journalists and commentators (L.A. Times or Cyclingnews.com in 2007), but sales didn’t follow. Why ?

Several reasons cross my mind, and I’d like to have your feedback to contribute to the discussion…

Shimano’s brief for IDEO was more or less as follows : help it create a $1,000, tech-laden bike that would lure baby boomers and their loose change off the couch (bicycling.com). It is very common in the design process that the consulting firm reformulates this brief, and it indeed proved to be necessary. Aaron Slar, social engineer for IDEO, and David Lawrence, marketing manager for Shimano travelled to different U.S. cities to find out what people think about bikes and biking and discovered all these things about people being intimidated by technology and basically wanting to get the feel-good biking experience they remember from their childhood. The prototype had grinded lugs and cable routers, a coaster brake and, more importantly, an invisible shifting mechanism. When IDEO presented their findings and recommendations to Shimano in Japan, “there was a long pause on the conference call. And it wasn’t just because of the translation“, says Lawrence. But the company rapidly got convinced, and started seeking partners within the industry.

This design process seems to have gone through the traditional steps, from understanding to prototyping and testing. Actually, I found few information about this “testing”-step. Who did Shimano and IDEO work with when they testes their prototype(s) ? Where there improved V2 and/or V3 versions based on customers’ feedback ? This would be interesting to know.

According to Daniel Gross, manufacturers associated in the Coasting-project (3 in the first year, 10 the year after) were rapidly found and seemed enthusiatic about the idea. Giant adapted bikes from its Suede product-line, Trek & Raleigh created bikes, the Lime and the Coasting. Today, the Shimano Coasting website shows 7 models from 7 different brands : Schwinn, K2, Phat, Fuji and the 3 brands that started with Shimano. I wonder what caused the number of manufacturers to drop ? They were indeed 10 in 2008, why did Sun, Jamis & Electra quit the program ? One possibility is that Shimano could not handle working closely with these 10 manufacturers and needed to skim off the least motivated ones… While some talk about a synergy between this major supplier and manufacturers, I wonder if the manufacturer’s didn’t think that Shimano would get too powerful if Coasting was a success ? Would have one single bike manufacturer have been more successful with the Coasting-approach ? 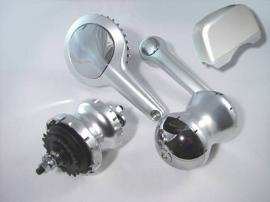 Shimano’s goal was to get 1,000 U.S. retailers involved the first year. In 2008, two years after the lanch of the group, industry consultant Jay Townley of Gluskin Townley Group said retailers were still hesitant to adopt the new product. To improve this situation, Shimano sent them an explanatory DVD and did set up a dedicated website, sellingcoasting.com. But even this kind of initiatives did not make sales take off. When I talked to a bike dealer here in Pensacola he wasn’t very convinced by the Lime’s (Trek’s Coasting-model) ability to reach a new target of customers. If bike vendors don’t grasp it, the customer probably won’t either…

PRODUCT : Did the consumer know what was actually sold by Shimano ? The company only sells the transmission and shifting-system by its Coasting group. This product is then mounted on the bikes by manufacturers, who sell the bicycle through independent bicycle dealers (IBD) in the United States. But Coasting is also a concept, a lifestyle, a new way of designing riding experience. I think it was made too hard for the customer to identify what he was actually buying : did he buy a Trek ? a “Coasting” ? a Shimano ? Who made what on this bicycle ? Why change the shifting-system ? I think it was not Shimano’s role to directly adress the customer, it is still the bike brands’ job to sell their products.

PRICE : The 3 initial Coasting bikes sold between 400$ and 700$. The Trek Lime’s retail price was roughly 500$, which is a fair price for a quality bicycle. It is half the price of what Shimano initially suggested to IDEO in the design brief. The aim of this pricing strategy was obviously to make bikes affordable to a large public who doesn’t ride bikes. I think the price was not a reason for failure, it was more that Shimano and, more importantly, the manufacturers were not able to communicate the benefits of Coasting to retailers and customers.

The K2 Easy Roller is (was?) available at 600$. Quite a bit for a bike with no handlebar-brakes (photo from besportier.com)

PROMOTION : The promotional strategy was intended to convey this feeling of freedom of riding a bicycle and to draw non-cyclists to the stores that sold Coasting. Newspaper advertising and guerilla marketing were used to increase awareness of Coasting, and the website Coasting.com was central to explain the concept and present bikes to consumers. The design of this flash-based website is fun and interactive, storytelling is used to involve the visitor (storytelling is part of the Design Thinking process, according to Tim Brown) and content encourages people to get on their bikes. Ideally Coasting bikes. Beside this, a demo-tour was also organized in several U.S.-cities to bring the bikes to the poeple and encourage PR & publicity.

PLACE : Coasting was intended to the U.S.-market only, and it has been launched in cities like Orlando or Phoenix before the whole country was covered in 2008. Shimano and the bike brands chose to sell their products exclusively at IBDs. I think this is one of the reasons that caused Coasting’s failure : while the website is a good way of presenting the concept/product/bikes, poeple are often unfamiliar with the specialized bike stores and bike-enthusiastic vendors. Why not selling through the web ? Was the reliance on a retailing network so important ? It might have avoided some obstacles too… But more than seeing problems on the U.S. market, I think that Shimano should have tried to introduce Coasting (or a similar technology, with a different marketing approach) into less mature markets like China, India and other emerging countries. Or even (very) mature markets like Scandinavian countries and the Netherlands, where product acceptance might have been higher.

The future of Shimano’s Coasting is unclear. On the internet, Coasting.com vanished and ShimanoCoasting.com has appeared, the content is unchanged. As I said in a previous post, the program has been abandoned by Shimano because sales never attained the expected figures. I think there was a huge potential in this approach, and this post explains some points that could have led to Coasting’s deceiving results.

What do you think ? Do you have more informations ? More ideas ?