Caloi is a major Brazilian bike manufacturer based in São Paulo, as well a leading brand for over 110 years. Caloi felt they needed to get closer to consumers and to understand what its brand meant to Brazlinian consumers. Together with Brazilian agency CO.R Inovação, they initiated a research project called “Reinventing the two wheels,” designed to understand the role of the bicycle and the Caloi in Brazilian’s lives. Very similarly to the Shimano Coasting initiative conducted by Shimano and IDEO, this project  consisted in meeting consumers of the target  audience in major cities in order to “discover the meaning and the importance a bike has on a biker life.” Explanations from Mariana Loducca Kok, one of the project’s managers at CO.R Inovação.
According to Mariana, Caloi felt the need to hire an outside consulting company specialized in strategy, branding and co-creativity to coordinate the project. This is because there’s an obvious need to let aside usual processes as well as traditional mindsets, “so CO.R Innovation Strategies was the consulting company chosen,” she explained me. Together, Caloi and CO.R created innovation teams to run the project composed of research, planning and branding professionals, psychologists and the company’s marketing board of directors.

The first step consisted of meeting people outside, possibly on their bikes. A CO.R team of research and planning professionals went on the streets to ride bikes with individuals among the target audience in Rio de Janeiro, São Paulo and Belo Horizonte. The objective was obviously to investigate their relationship with bikes, the object as a means of transportation, the feelings involved when riding on two wheels as well as all the brands that they think about when talking about bikes. 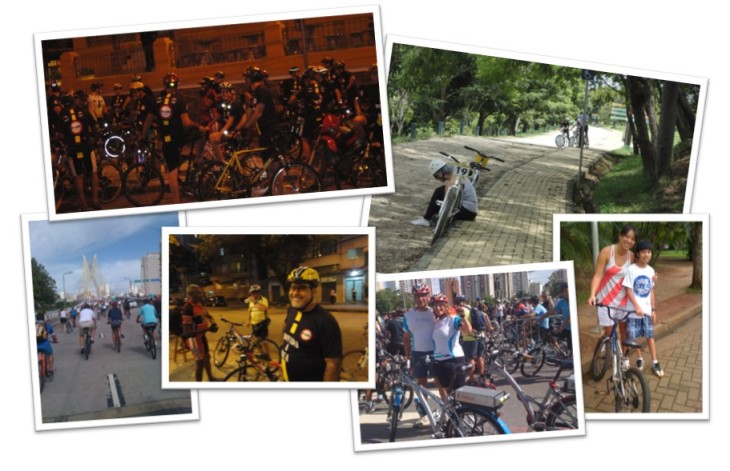 The second step of the initiative was to meet people inside i.e. going into their homes to get a deeper understanding of this universe. “We talked for over 3 hours about mobility, the bicycle’s role in the city and the target’s life, use habits, choice criteria, knowledge and market brands’ meanings,” Mariana Loducca explains. “At the end we also talked with their friends who share this passion in a very creative and funny picnic.” Beyond regular consumers, CO.R also talked to experts and bike-lovers to better understand the emotional universe related to it. “We wanted to understand what feelings it arouses, engage hundreds of people in bike-riders groups, a movement that is currently in evidence in Brazil in the last few years,” she says. “We also talked to mobility and urban planning experts”

We met lots enthusiastic bikers. They were always available to talk, to give their opinion and to show off their background (Mariana Loducca Kok)

Last but not least, the CO.R team also visited 3 bicycle stores in the project’s three markets to identify sales arguments, brand image and envisage operation opportunities. This was a much more operational phase, but as a prescriptor, bike dealers are a crucial link in the chain between Caloi and the consumers. 15 stores were visited and 30 salespeople interviewed in the attempt to create this true reference mosaic on the Caloi brand and new bicycle codes in Brazil. Then CO.R organized a Brand Code workshop workshop, which involved both Caloi’s management and CO.R’s research team.

The different research phases revealed that Caloi was perceived as a popular, traditional brand. Other brands were perceived differently, as the image below illustrates. This type of insights were used to develop the new Caloi Brand Code, a true branding manual that reveals the brand’s DNA, brings its vision, mission and values, attributes, positioning, personality and implementation guidelines.

All in all, the project consisted of over 5 months of work, hundreds of miles riden on two wheels, 180 interviews with consumers in 3 Brazilian cities, 14 mini-groups and 16 interviews with internal audiences and 3 interviews with bike-lovers. Mariana from CO.R told me that this project allowed Caloi to identify deep consumer insights about cycling and transportation in cities. A concrete initiative developped after that project is Caloi’s claim that every trip that is no longer than 3km should be done on a bike (see the brand’s facebook page). The brand also created video ads that convey this message, as you can see in this Caloi advertisement. This is an interesting initiative that goes with the trend of communiting by bike. I had never heard of Caloi before, but now I know it as one of Brazil’s major bike manufacturers.

Through this project, more than rethinking Caloi as a brand, it was possible to create a new culture in the company (Mariana Loducca Kok)

What is interesting is this research project has not been conducted to innovate with a new product range or a new offer, but just to be closer to the consumer and adapt the brand’s positioning and communication. This is very different from the example of Shimano, which commissioned design-thinking firm IDEO to identify insights about cycling… which led to the development of a totally new product: the Coasting group. Eventually this offer did not work on the market, for whatever reason. But it’s an interesting case, and another possible application of on-the-ground market research.
And just for the visual pleasure, here’s another recent Caloi ad. That one is not about people and tradition, rather is it about sport, competition and excellence. A different positioning, targeting a different audience, that was conducted in parallel to the CO.R research project.
–