The news is from this summer : the Cupertino-based IT company Apple has patented a system that uses iPhones ir iPods as bicycle computers. Based on the devices’ abilities to create and communicate data, and on several connectors on the bicycle, the Smart Bicycle System would allow a rider to monitor about everything about riding on a bike, and more interestingly : to share it.

Within the marketing community and among designers, Apple is famous for a lot of things ! Among the (very tribal) sport community, the company is known for having connected the runners’ shoes with an Apple-device to monitor distance, time, heart rate, and other key stats and communicate it to the runner. This endeavor was supported by Nike and is called Nike+iPod ; it has shown stunning results. In marketing terms, Venkat Ramaswamy points out some benefits in his article dubbed Co-creating value through customers’ experiences : 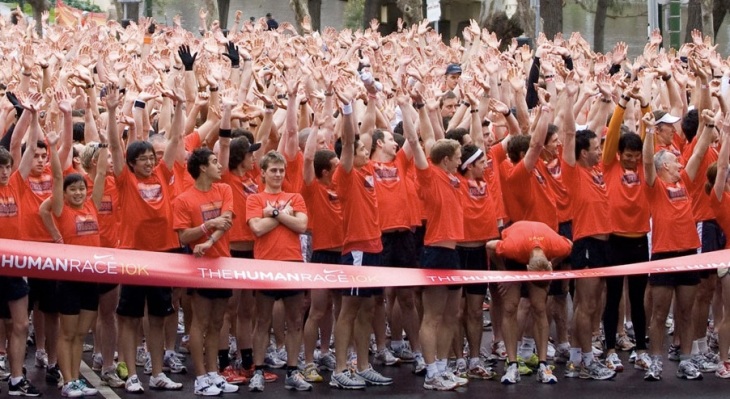 Launched in 2008, the Nike+ Human Race shows how to gather the community (image via inside.nike.com/blogs)

This case illustrates what Ramaswamy calls a “shift in the basis and process of vale co-creation – from products and services towards experiences co-creation platforms“. Earlier this year, Adidas launched a similar iPhone app (and service), called miCoach, which aims to do exactly the same. Now, does Apple want to replicate the same strategy in the bike-business ? Or is this one of many ‘tactical’ patents that Apple registers to confuse the competition ?

Just a reminder : the Smart Bicycle System would allow a bike rider to monitor , on an iPhone or iPod, data like speed, altitude, heart rate, derailleur setting, cadence, wind speed, path completed or pace. But the real innovation (otherwise it wouldn’t have been approved by the US Patent and Trademark Office) is the ability to communicate electronically with other cyclists, for instance with Wireless-Lan, and to share the data such within a group of riders or even with remote locations, like home. Apple also gives details about the display : it could be embedded into the handlebar or… projected on the ground (a “cover-your-ass bet“, says Fast CoDesign’s article with a lot of humor).

Communicate within the group - but also with friends or family at home... aren't there some safety issues ?

This very article from Fast Company’s CoDesign-website is called “Apple’s ‘Smart Bike’ could squash all other bike tech“. The concept indeed has a lot assets, especially the fact that we will be able to share and review biking stuff on the very well designed interfaces that Apple makes. There are very interesting possibilites for pro teams that want a tool to manage group training. We could go even further… what if the whole pro-peloton would be equipped with such devices (thus knowing the competitors’ heart rates live, for instance) ? I think it will never happen, especially in Europe where there’s a trend towards removing earbuds from racing pelotons.

Cavendish's phone-call gesture pleased sponsor HTC in 2009's stage win at the Tour de France. HTC & Garmin are both competitors of Apple, in some way

Furthermore, there are other actors in the professionnal circuit. I think of two companies that sponsor american teams : the Taiwanese HTC (Team HTC-Columbia) or the American Garmin (Team Garmin-Transitions), which would both have a close eye to Apple entering the bicycle market. I’m not sure if Apple would sponsor a pro cycling team, though ! Not mentioning that Google will kill the navigation-market anyway, but this is another story.

Navigation already exists on bikes, Apple is not inventing anything new here. With their product, however, we could do everything we usually do on an iPhone, the patent even seriously says that video-conferencing will be made possible. But is it really desirable that we make so much while riding ? Of course not. We could use these functionalities in a much smarter way, and the following two examples illustrate some uses:

Presented at the Salon de l’Automobile in Paris this year, Smart’s ebike concept uses a smartphone that you can plus onto the handlebar. With the Smart Drive application, the rider can listen to the radio, control the power input of the motor placed in the rear hub and navigate by GPS. When you remove the phone, the bike locks itself.

Another ambitious project (see previous blog post on cycling design trends) is the Copenhagen Wheel project, which uses an iPhone in a very similar way. The difference is that this concept also gathers urban data like pollution levels or traffic jams to send it – via smartphone – to the community of commuters. As for me, this is the most revolutionnary concept of all !

Maybe Apple has recognized this, and they’re either “covering [their] ass“, or they plan to collaborate in the project… wait and see.