When I read the German book Marke Eigenbau (Do-It-Yourself brand) about a year ago, I claimed that it was a fascinating and eye-opening book about the revolution of consumption going on currently. Mass-customization, co-creation, crafting and 3D-printing are symptomatic movements towards tailored consumption and/or production initiated by the the consumer. Seth Godin said it in 2005 already:  Small is the new Big. Someone who recognized and wanted to build on this revolution is Lionel David, founder and former CEO of CrowdSpirit, an innovation community based on the idea of crowdsourcing the whole product development process, from ideation to marketing (and even distribution). The platform is not online anymore, and here’s why…

As Bloomberg described back in 2007, CrowdSpirit “plans to use crowds to develop and bring to market tangible, inexpensive, electronic devices such as CD players, joysticks for video games, and Web cams“. By involving their private community, the people from CrowdSpirit hoped that the products would fit consumer need better and cost less than the traditional electronic products on the market. CrowdSpirit was based on community co-conception. 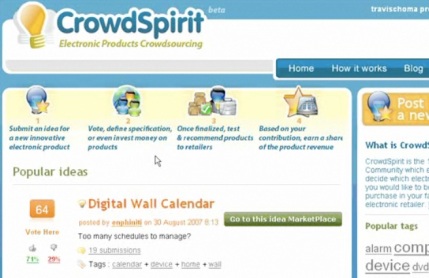 The concept has been featured on the TechCrunch40-conference in 2007 as one of the most promising startups. Praise even came from Austria. Blogger Hannes Treichl called the project The most innovative crowdsourcing-project in the world“, mainly because the start-up completelly bypassed marketing departments and because it deals with real products. The French platform indeed specialized on electronic products, which it intended to develop entirelly by its community. As shown in the above video, one of the most promising projects was a Digital Wall Calender which allowed people to display and manage several calendars on the same digital, wall-monted flat-screen device.

The co-conception system adopted by CrowdSpirit was based on five consectutive steps:

We can see how the whole process move back and forth between collaborative and individual tasks. This hybrid organizational form implies new kind of challenges that Lionel David might not had expected. Because of lacking community involvement, he indeed had to evolve his business-model.

As our Austrian admirer of CrowdSpirit noticed, the firm “was not profitable, learned from it and adapted its business-model“. What’s interesting is that CrowdSpirit did not reject the idea of crowdsourcing, it just recognized that the community’s core competency was not co-conception but ideation and selection of concepts. 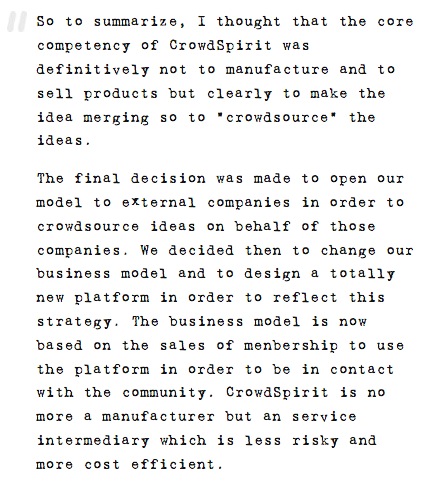 A research paper from two French academics also analyzed CrowdSpirit’s journey over more than a year. The researchers highlight how community-based value creation strategies are difficult to implement: it requires deep knowledge of people’s motivations to develop an appropriate incentive model, the managers of such platforms must identify their community’s core competencies and last but not least, it’s an ongoing learning process. In 2010’s follow-up of the TechCrunch40 companies, CrowdSpirit still appears as ‘in business‘… but today the platform has vanished. 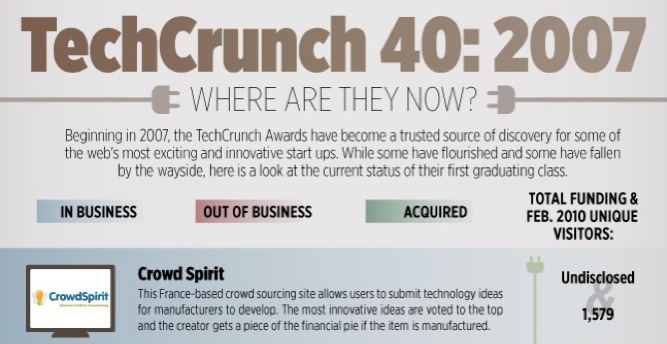 What led to CrowdSpirit’s fall? Was the platform badly designed for co-creation? Francis Gouillart recently said that engagement platforms produced an abundance of ideas but no real co-creation processes… I then found an example of a well-fucntioning engagement platform: Tchibo Ideas. Did CrowdSpirit fail because their was no real brand equity behind the crowd? Tchibo is a renowned brand, CrowdSpirit popped up from nowhere! Should the platform have been launched globally instead of in France? Or was it just bad timing?

I recently talked about community brands like Wikipedia, Mozilla or Threadless. I think CrowdSpirit could really have been a similar success. What’s your opinion on this? Do you know of other crowdsourcing platforms that failed to engage an audience? I’d love to hear your thoughts, especially now that we see successful platforms like Quirky… what do they do better?