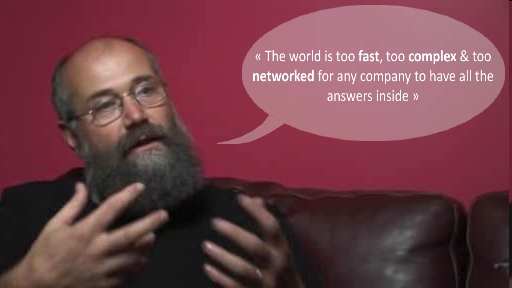 Yochai Benkler, author of The Wealth Of Networks

In the previous weeks, I blogged about co-creative initiatives of Danone and three different co-creation engagements of Heineken. While the examples I used shows how Danone choses according to the local/global scope of co-creation projects, Heineken’s choice seems to focus more about the specialization of the co-creation platforms they work with, from calling for ideas to managing a whole on/offline process. The part of our series about the way online platforms are being used as intermediaries by brands, we’ll have a look at  Coca-Cola, which is renown to be a brand people get passionate about. Such a global brand just has to co-create since a lot of its value lies in peoples’ emotional engagement. Here are a couple of examples:

Coca-Cola is the most valuable brand in the world. Based in Atlanta, the brand is often criticized for being an imperialistic and capitalistic ambassador of the american way of life (which is propably true). However, Coca-Cola adjusts to local markets, and they have to: because it sounds phonetically weird (Chinese), because local spin-offs are grabbing market share, or for a variety of other reasons…

Breizh Cola is a Coke-inspired drink from Brittany which recently introduced an innovation: a Stevia-sweetened coke. Coca-Cola reacted to this new competitor by introducing a localized communication campaign, and by igniting a partnership with Brittany’s coastguards

But I think the brand already has a good understanding and thoughtful strategy on the web, as their Online Social Media Principles show. This type of general policy, “pretty simple, down and dirty, three pages” as Coke’s Head of Social Media says, is full of common sense and allows average internet users to be genuine brand ambassadors just by following a course. A presentation I did last year about VitaminWater Connect highlights how these general principles were applied to one of Coke’s brands: Vitaminwater.

This is similar to Heineken by being run on Facebook (Co-create the club of the future), and similar to Danone by being based in game mechanics (design the ideal Fruchtzwerg for kids). But even though some see this as an impressive crowdsourcing operation, the really co-creative engagement is limited since need revelation is only indirect and, more importantly, the specially created beverage was available a limited time only, and only in the US.

On the other side of the pond (i.e. in the United Kingdom), Coca-Cola did engage with consumers by working with an agency called Face. In several projects, they claim to have identified insights about activation and communication, about making better ads or about youth intimacy. These campaigns seem to have yielded interesting results, Face says about the later project that “it became apparent there was a lack of emotional engagement between young people and the fizzy drinks category as a whole […] the Coca-Cola team changed their entire strategic direction“. Unfortunately, Face doesn’t cite concrete implications and actions.

A concrete example in France, however, is the following one: 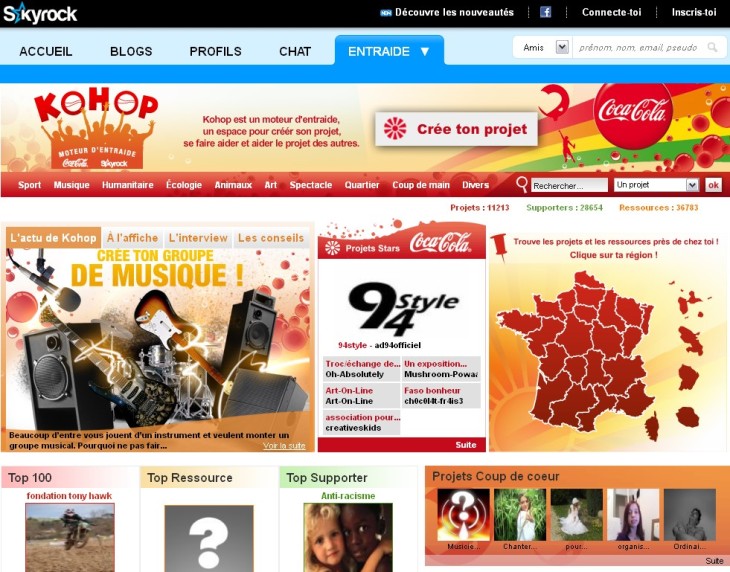 An engagement platform for the youth, co-created with Skyrock.com: Kohop

Kohop is a cooperative network that targets teens and engourages them to engage in social projects. The engagement platform has been set-up with the French blog-provider (and radio-channel) Skyrock.com, used by a lot of teens in France – a co-created platform in other words. The website gathers more than 11,000 projects supported by 28,000+ people, in France only. I found other platforms like MyCoke, focused around branded content and music, or CokeReuses, gathering creative and innovative reuses of Coke packaging. There are probably thousands of others, I couldn’t list them all. What a challenge it must be to be Coke’s VP of Design…

Since you can’t do everything by yourself, especially when your brand is so valuable and popular, you ask people from all over the world to inspire you with their own interpretations of you brands’ messages. Two years ago, Coke Zero asked young Singaporean creatives to reinterpret the tagline ‘It’s possible” on eYeka, and more recently a global campaign was launched to celebrate “Energizing refreshment”. The platform had stunning participation numbers (946 photos and 284 videos) and I think the winning entries are awesome (the winning illustrator came from Italy, the winning photographer from Hong Kong and the winning movie-maker from New Zealand) came from Italy), this shows how passionate people are about Coca-Cola.

One of my favorite illustrations, created by “xXGloGoXx” from Princeton (USA)

But even though Coca-Cola’s online engagement is huge and makes sense, the company is aware that change doesn’t only come from marketing investments, but also from hardware & design investments like the Freestyle fountain, which is the company’s largest equipment investment in history!

In a nutshell: I think Coca-Cola (as a brand and as a company) has the value, the cash and the mindset to engage in co-creation projects. They understand that it’s crucial for them to interact with people, that’s why they (1) use co-creation to source insights and opinions and (2) leverage peoples’ passion to generate compelling, user-generated content.