In my quest to better understand creative crowdsourcing participants, I recently interviewed Santawen alias Rabah Brahimi, a French filmmaker, director and graphic designer. Santawen often participates in online contests on websites like eYeka (he was features as creator of the month of June 2012) and took some time to sit down and chat about his participation in online video contests.

I don’t have any professional equipment, just an affordable camera and a lot of free time.

His views about the evolving world of advertising and the advent of creative crowdsourcing were particularly interesting, as he worked numerous years as an agency creative. Here are some excerpts of our conversation.

Hi Santawen, could you briefly present yourself?

Sure, my name is Rabah Brahimi and I am producer for over 10 years now, since 2010 to be precise. I started with advertisements, I also worked as a screen writer in TV, produced a feature film, and got back to advertising again. I discovered eYeka in 2009 and registered because I saw it as a good way to produce ads with minor investments. At the beginning, it was out of pure curiosity, I think the first contest I participated in was for the French insurance company MACIF.

I have an advertising background – I am a former agency creative – and I saw eYeka as a new way to create. I easily understand why brands like to use websites like eYeka, because we have the freshness and the naivety to make home-made spots. In agencies, you often restrict yourself and bridle your creativity because some ideas might have already been used, or you’re not sure your idea is really great. This is a typical case of experience being detrimental rather than beneficial. On eYeka I see a lot of unfinished or underdevelopped ideas, but this is OK, and it makes the whole concept attractive.

What “place” does contest participation take in your life today?

I don’t know, there is no rule actually, it really depends on my availability. That’s also what I like: I am free to participate or not, there is no one tp blow my ears and tell me to finish my work for a given deadline. I can test myself to see whether I can submit something good for the deadline, and if not, then I just don’t submit it! For example, right now I don’t have time because I’m working on my house. But actually, when you have a great idea, you can always find time.

The brain is an extraordinary machine because ideas come out of the blue, and you’re the only one to decide whether or not to execute them! 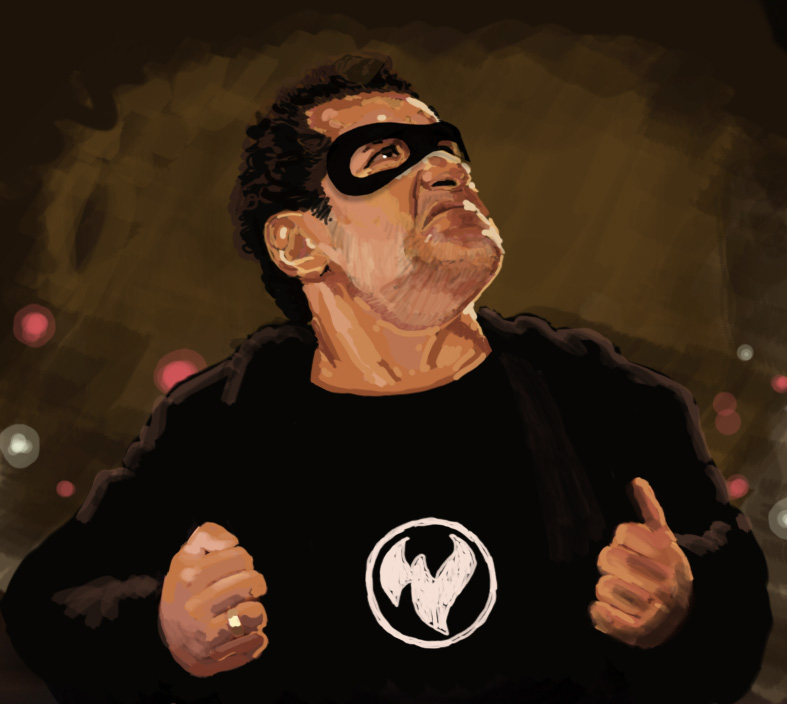 Santawen, here with a cool “Santawen Productions” t-shirt, is a regular participant on eYeka since 2009

What makes you decide to participate in a contest rather than another?

It’s more about the product. Remember I’m an ex-agency creative, and when I worked in advertising, the best references to work for were automotive brands. So when I see a brief for a car manufacturer on eYeka, it tickles my creative brain and I want to produce my very own advertisement for this company. Something better then what I see on TV every day. Beyond the brands, for me what matters is the prestige of the product in the advertising world.

Beside cars, I also like the soda brands like Coca-Cola. But the problem with such a big brand is that I know that they have a lot of money, and I think they could pay me more for my idea. So sometimes I would even choose a less famous brand of the same category. For me it can be more interesting to think about an an advertisement for a challenger, where I can really think originally and out of the box. I agree, this may be weird, but I think it is due to my advertising background. I think most internet users don’t think that way.

(Santawen’s 3rd-placed entry to LG’s Follow Me contest, shot with an iPhone)

I think brands can benefit from co-creation: Even those who don’t win a contest are getting involved with the brand, which changes the company’s image for the better

Merci Santawen for taking the time to speaking about your experience, and good luck for your participation in future contests!