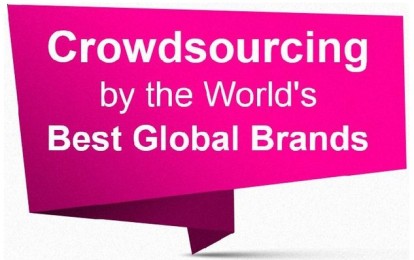 It’s been a little more than a year that I started curating crowdsourcing initiatives by the World’s Best Global Brands on this timeline. As I write this, there are now 479 examples of crowdsourcing listed, with information about the initiatiors, objectives and results of each initiative – at least I try to keep it updated to the best I can! I’m extremely humbled that some of the brightest minds in business and academia (@lindegaard, @jtwinsor, @bogers, @klakhani, @masscustom)  also appreciate this timeline. As we are ending 2013 these days, and starting 2014, let me just share some facts based on this timeline’s data. Just scroll down and let the visualizations speak by themselves.

First, just by looking at the bottom strip, you can see that the number of dots has considerably increased since 2006:

This considerable increase is mostly fueled by the rise of video contests:

Video crowdsourcing is indeed a huge trend in the advertising industry.

It allows brands to get video content at a much cheaper price than before.

“We achieved something like a 900% productivity gain against briefing through traditional means,” Coca-Cola’s Leonardo O’Grady said about a crowdsourcing initiative with eYeka (disclaimer: I work for eYeka):

Back to the data.

These are the 10 companies that most used crowdsourcing since late 2005:

Don’t be mislead: these are companies, not brands.

PepsiCo is on top because of the yearly “Crash The Super Bowl” contest (which is in its 7th edition), the Coca-Cola Company also counts contests for the Sprite brand, etc.

If we take out the various Doritos and PepsiCo contests, these are the brands that most used crowdsourcing since late 2005: 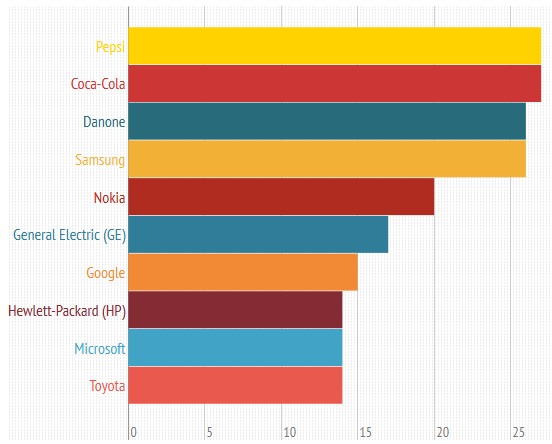 OK, I admit, it doesn’t change that much.

You weren’t mislead by much. All company brands are there, in the same order.

The only real difference is that Pepsi and Coca-Cola are sharing the top spot, just before Danone.

Let’s look at what these top 3 brands did, crowdsourcing-wise:

If you want to find out more about specific brands, go to the timeline and use the search function (bottom right):

Last, some facts about the crowdsourcing platforms.

These are important players, as 66,8% of all initiatives from the timeline have been handled by crowdsourcing providers.

The others often took place on social media or dedicated brand websites.

Here’s a word cloud of them:

Poptent started organizing contests for the World’s Best Global Brands as early as 2007.

The other platforms followed, with different growth patterns. 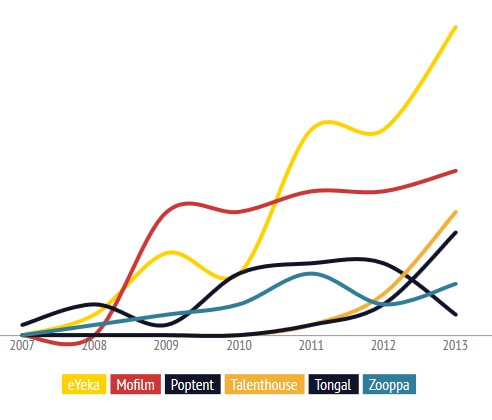 I would be happy to dig into the data again and answer questions.