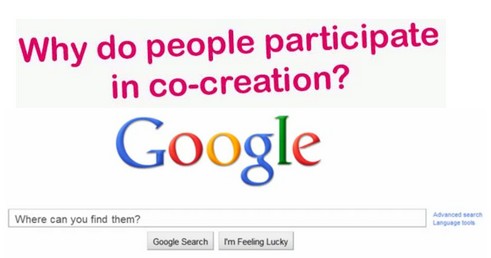 Answering these questions basically leads to one answer: COMMUNITIES

Forrester Research recently issued its Forrester Wave™ about Co-Creation vendors in 2011.This report can help consumer product strategy professionals to choose a vendor to work with in idea generation or content creation projects, and compares 6 actors of the field: eYeka (Paris, France), jovoto (Berlin, Germany), Hyve (Munich, Germany), ChallengePost (New York City, USA), Redesignme (Eindhoven, The Netherlands) and NapkinLabs (Boulder, USA). This post is not about the report (download it for free here) but about two neat videos released by Hyve and eYeka recently, check it out…

In the first video, “Co-Creation in New Product Development”, has been released by Hyve. It’s basically a general video about major co-creation projects and the paradigm of open innovation.  Companies like Tchibo, Danone or SAP are cited as innovative companies who do connect whith consumers to co-create via the web. Hyve’s core competency is it to set up specific dedicated community platforms and to engage consumers and/or employees by asking them to contribute with ideas (correct me if I’m wrong, people from Hyve). They did this for Henkel or Svarowski, for instance, as you can see on the video below:

Even though it’s not explicitely mentionned in the video, there are loads of scientific publications which underline the advantages of these open strategies: a paper about toolkits for idea contests, meta-analysis of co-creators motivations (also here), a comparison of collaborative vs. competitive contests (also here), a case study of Nivea’s co-creative NPD process, a very interesting comparison of Chinese/English-speaking online community of creatives… As Johann Füller says in an interview with Doug Williams, “[Hyve’s strategy is it to] heavily engage in scientific research […] in order to maintain and extend [its] expertise in the fields of co-creation“.

The second video takes another approach by featuring creative consumers directly. The core competency of eYeka indeed is to stimulate and animate a ‘private’ community of creative people and to allow companies to leverage it for specific projects relating to innovation & marketing. Interestingly, motivations to participate seem to be a little different from what Füller found in his meta-analysis (1. curiosity; 2.need; 3. intrinsic interest in innovation; 4. reward), because main drivers can be summarized in fun, fulfillment, fame & fortune. This is based on experience and intuition, not on research (yet), but check out the video first:

For more details about this community, you can check out this infographic. Obviously eYeka’s projects don’t ask for the same kind of contribution than Hyve does on its community projects. The idea behind it, though, is the same: engage creative, innovative people in projects around brands to fuel their innovation & marketing efforts. In another paper about forms of co-creation, the authors define it as…

an active, creative and social process based on collaboration between producers and consumers

… that’s pretty much what these videos are about. Any comments? Remarks? I’d be glad to hear from readers.