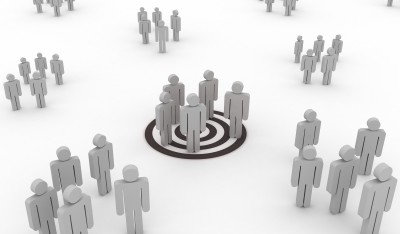 Crowdsourcing and marketing, a tough equation to solve. Why? Because crowdsourcing is about openness whereas marketing is about targeting; crowdsourcing offers serendipity when marketing is looking for predictability. Brands often want to target a specific target audience: “Can you only ask Chinese people to participate?” or “Is it possible to accept only the users of my product?” or even “I want only ideas from women from 25 to 35 years, is that possible?” are questions that often get asked while discussing the possibility to launch a crowdsourcing project. The truth is that the internet is a global medium and that everyone can potentially participate in a crowdsourcing challenge. Targeting is difficult, and only few succeeded.

Target Marketing involves breaking a market into segments and then concentrating your marketing efforts on one or a few key segments. It is one of the most elementary rules in marketing: a company has to target a specific consumer segment and concentrate its marketing efforts in order to be more efficient. Hence, when marketers are confronted to the possibility to initiate a crowdsourcing challenge to solve a marketing problem, it seems obvious that the “crowd” should be targetted too… But wait, what is crowdsourcing again?

Crowdsourcing is the act of a company or institution taking a function once performed by employees and outsourcing it to an undefined (and generally large) network of people in the form of an open call (Howe, 2008)

Yes. The crowd is undefined and large. This means that you don’t know who you’re talking to, how many people will hear your call, how many will take the time to solve your problem and, last but not least, what you will get. This is scary for a company, isn’t it? However, the innovation literature has also acknowledged that the openness of crowdsourcing is good. In a study performed on the problem-solving platform InnoCentive, Jeppesen and Lakhani (2010) have found that “the provision of a winning solution was positively related to increasing distance between the solver’s field of technical expertise and the focal field of the problem“. In other words: your problem is likely to be solved by non-experts.

Today, crowdsourcing is increasingly used for innovation, and this study is probably a milestone that led to this acceptance. In the field of marketing, however, there is still a reluctance to adopt the openness of crowdsourcing.The reason is that innate reflex to target specific consumers…

An idea can come from everywhere, but it’s better if it comes from my customers

In a paper called Managing Unexpected Publics Online, crowdsourcing researcher Daren Brabham highlights this problem. He analyzed a crowdsourcing called Next Stop Design, which was funded by the U.S. Federal Transit Administration and intended to target people living in and around Salt Lake City, Utah. However, after a famous architecture blog and the official blog of Google SketchUp picked up the news of the competition, it attracted a somewhat unexpected audience, well beyond the borders of Utah!

His study shows that visitors of nextstopdesign.com came from 127 countries. While 53.7% of the website visitors came from the Unites States, a long tail of participants came from diverse countries such as the UK, India, Greece or Canada. About the outcome of the project, Brabhan says that “as the competition went on, many international participants were drawn to the project, and most U.S. participants were not from the state of Utah“. Furthemore, while the project targeted amateurs, he describes that “most of those who submitted designs turned out to be professionally trained in architecture or design“. Is conclusion is that:

Unexpected publics, who learned of the project through the Internet, caused global-local and amateur-professional tensions that complicated the outcomes of the project

Actually, on Next Stop Design’s homepage, they show another winner. I have no idea whether he’s from Utah or not… but anyway, the facts show that targeting is not easy when you crowdsource ideas or content. Interestingly enough, I have a couple of examples of crowdsourcing examples that seemed to be a success. There are these examples from India, and there’s this one targeted towards China:

The video has not been crowdsourced, but the ideas for the video have been. Volkswagen asked Chinese consumers to imagine the car of the future, taking their natural and social environment into consideration. They received 119,000 entries (boom!), and one of these entries imagines a flying car that floats on electromagnetic fields. Beyond the clever idea, Volkswagen generated a considerable buzz with this video. China is a prioritary target market, and this crowdsourcing initiative successfully adressed this audience. Personaly, I think that it worked because of the video… not because of the ideas. A little more information about this initiative is available on Opinno.

So, should companies try to target specific audiences when crowdsourcing? Maybe the solution is to restrict participation to residents of a particular country, like the example above. But, to be honest, I’d be much more convinced if there was a paper that says that winners of crowdsourcing competitions often come from culturally close countries. To my knowledge, there is no such paper yet… or is it?

Howe, J. (2008). Crowdsourcing: Why the Power of the Crowd Is Driving the Future of Business. New York, NY: Crown Business.