I have just finished Benjamin Franklin’s autobiography (full text here), a short and entertaining read written in 18th century English. Once you get used to the prose, it becomes very enjoyable to read. I learned a lot about the founding father, his life and travels (including that he started writing the autobiography just across the Seine, in 1784), his views, skills, inventions and various projects as a public servant.

But the reason I bought this book is less historical than personal: I wanted to learn about his 13 virtues and how they helped him become a better person. I have my own daily habit (S.W.A.L.L.O.W.S., see the end of this article) and am keen to learn about others’.

It is rare to have such a great man’s testimony, especially from centuries earlier, including his daily habits and efforts for daily self-improvement. Portraits and books sometimes hide the complex personalities and daily accounts, which this autobiography nicely hints to.

“Human felicity is produc’d not so much by great pieces of good fortune that seldom happens, as by little advantages that occur every day.”

Franklin wrote about his 13 virtues as a way to be more proficient at work, more disciplined in life and happier with the people he spent time with. He says that they did not guide every single day of his life since coming up with them, rather did he use the list as a moral compass.

The book does not say how much he abode by them as part of his “bold and arduous Project of arriving at moral Perfection” throughout his life, nor that he lived by them consistently anywhere he went. Yet, they underline a desire for exemplarity that I admire and that participated in his well-being: he says he “fell far short of it, yet […] by the Endeavour of it made a better and happier Man.”

“I grew convinc’d that truth, sincerity and integrity on dealings between man and man were of the utmost importance to the felicity of life; […] I had therefore a tolerable character to begin the world with; I valued it properly, and I determin’d to preserve it.”

So what are Benjamin Franklin’s 13 virtues? 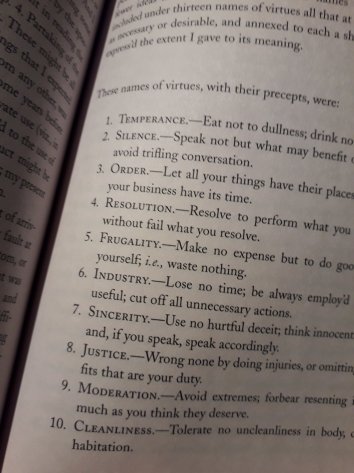 The latter is a bit mysterious, as it doesn’t explain virtue #13. Of course, everyone knows Jesus and Socrates, but how do they embody humility? This blog says it’s about engaging into uncomfortable conversations, this one says it’s a precept to pride (or lack of it) and this discussion says it’s about vanity (or refusal of it). Let the injunction be Franklin’s mystery.

As for how to acquire and sustain these virtues, Franklin worked on each during one week. The first of 13 weeks, he would pay particular attention to Temperance; the second, to Silence; the third, to Order etc. He decided that 13 virtues were either necessary or desirable, arranged them so that the first acquired could help in assimilating the second, and so on…

“My intention being to acquire the habitude of all these virtues, I judg’d it would be well not to distract my attention by attempting the whole at once, but to fix it on one of them at a time; and, when I should be master of that, then to proceed to another, and so on […]. Temperance tends to procure that coolness and clearness of head, […]. This being acquir’d and establish’d, Silence would be more easy.”

He used a notebook divided in pages, where tables would be filled with dots for each fault – or lack of virtue – to track his progress. The whole cycle took him, there being 13 virtues to track, a bit more than 3 months.

I enter’d upon the execution of this plan for self-examination, and continu’d it with occasional intermissions for some time. I was surpris’d to find myself so much fuller of faults than I had imagined; but I had the satisfaction of seeing them diminish.

But as time passed, Franklin did so less regularly. His busy schedule, his travels and other occupations took more time (and maybe he had internalized the virtues, needing less self-examination?).

After a while I went thro’ one course only in a year, and afterward only one in several years, till at length I omitted them entirely, being employ’d in voyages and business abroad, with a multiplicity of affairs that interfered; but I always carried my little book with me.

He always kept his little book, reminding him of the 13 virtues that would make him a morally virtuous man. By writing them down, he not only shared his wisdom with his son – for whom the autobiography was initially intended – but also with the world.

Now, whenever I will walk, run or cycle through Passy, I will remember that Benjamin Franklin sat there over 200 years ago. And I will try to remember the 13 virtues by heart.

Thank you for reading.