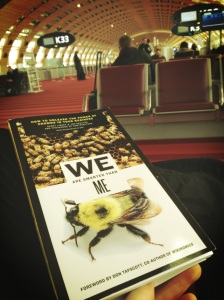 We Are Smarter Than Me, How To Unleash the Unleash the Power of Crowds is one of the “older” books when it comes to crowdsourcing, as it has been published in 2008. The authors, Barry Libert (investor and strategic advisor) and Jon Spector (Vice Dean and Director of Wharton Executive Education), explain in their introduction that since “there is no practical guide to translate [the concepts of crowdsourcing, wikinomics and open source technology] into usable tools and techniques,” this book would “fill the gap, describing in detail how businesses of all kinds can make the wisdom of the crowd work for them.” But I must admit that I closed the book disappointed, here’s why.

I stumbled across this book while researching for the crowdsourcing timeline, because it talks about a crowdsourcing initiative by Mastercard (p.70), one of the world’s most valuable brands. “A pioneer in [using crowdsourcing for marketing] was Mastercard,” they explain, “which invited visitors to its web site to create their own versions of the highly successful “priceless” ads.” The problem is that the book doesn’t provide any precise dates or results, which didn’t help. So I couldn’t add it to the timeline… but I could read it and learn about crowdsourcing, which is a cool side effect.

My first remark is that it’s a book about the trends of collaboration, web 2.0, online communities and new business models, not only crowdsourcing as I would narrowly define it. It the eight chapters, the authors describe a variety of examples around product development (Brewtopia, P&G, SugarCRM…), customer service (Cookshack, Intuit…), marketing (P&G, Mastercard…), content aggregation (iStockphoto, Current TV…), lending and funding (Prosper, Zopa, Commonangels…) or management (The Business Experiment…). Hence, I think it’s useful to underline that those who look for something precise and narrow will be disappointed as it’s about pretty much every type of initiative that involves lots of people!

However, beside the examples, I also found some interesting passages. The first one is a description of how Amazon’s Mechanical Turk started (p.8):

In 2005, [Jeff] Bezos created a web site to enroll volunteers in the task of finding duplicates among the millions of Amazon web pages – a task that his software could not handle. The volunteers were given a few cents for each duplicate page they found. The process worked well, so Bezos turned in into a business. The web site was renames Mturk.com, and Amazon invited software developers to tap into it for such tasks as finding specific objects in photos, translating text, and judging the beauty of a scene or object.

This is cool to read, especially when you know how big Amazon’s Mechanical Turk service is today. Turkers come from all over the world, participate for a variety of reasons, and execute a variety of tasks. Similar crowdsourcing platforms have emerged, and the logic of outsourcing easy tasks is transforming lives across the globe. Another interesting example featured in the book is that of Idea Crossing (p.40)

Idea Crossing initially hoped to link consumers who had come up with great product ideas to the companies that could bring the ideas to market. But when the brainiacs leaped at the chance to tackle real-world problems […] the experiment graduated into the annual Innovation Challenge

Idea Crossing was one of the first companies to leverage crowdsourcing to bridge the gap between students and companies (like Mindsumo or Studyka today) and their clients included companies like Chrysler and Hilton Hotels, according to the book. Today their website is still live, but it seems that they expanded their reach beyond student competitions, “connecting entrepreneurs with the resources needed (capital, mentors & service providers)” says their twitter account. The last example that I found relevant in today’s environment is Cambrian House (p.12):

Canada’s Cambrian House entered the crowdsourcing lists in 2006 with a business premise that was simplicity itself: The best way to uncover new ideas for software […] is to rely on software users themselves. The Cambrian development community of programmers, graphic designers, copywriters, illustrators and the like bring the concept to life [and] Cambrian House shares 1 percent of its annual profit with its community

Later in the book (p.124), the authors say that there were “more than 200 [ideas] under development by the Cambrian House community without any interference from the company itself” at the moment the book was written, which was 2007. Well it turns out that Cambrian House eventually failed, sold part of its assets and continued to sell “crowdsourcing in a box” (licensing its technology to other sites that want to make a go at crowdsourcing, Techcrunch explained) under the Chaordix brand (see also here). This is an interesting evolution, one that French start-up Crowdspirit could not take when it failed.

That’s about the content: An interesting book that illustrates the general community and crowdsourcing phenomenon with early examples. Even if it’s all over the place, I think it was a useful book back then, which is already a little outdated (things move fast, very fast!). About the form, I have a more critical opinion as it features 2 or 3 illustrations per page, throughout the whole book. This is not only annoying, but it also makes the book appear as cheap. Easy word plays (“Know when to step in” is illustrated with a shoe, for example) are immediately accompanied by stock photography illustrations… why?! It’s just so annoying. Another remark is that in the last 20-30 pages of the book, there are an awful lot of editing errors, as you can see below. 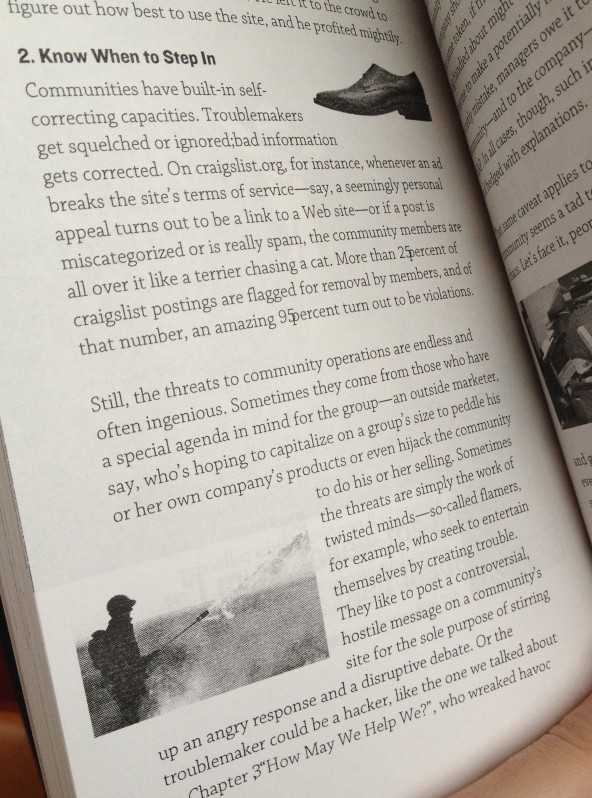 If you look closer, you’ll see the numerous editing mistakes and typos that swarm in the end of the book…

That’s what I think about We Are Smarter Than Me, How To Unleash the Unleash the Power of Crowds. It was an interesting and entertaining short read (not because of the images!) that leaves you with a bitter taste. In the end I can’t take it very seriously. I won’t cite it in academic articles I think, even if it has been published by Wharton School Publishing and Pearson. I like one of the final phrases of the book, which also concludes this blog post nicely:

Whatever your feeling are about this book, we urge you to continue your exploration of the crowdsourcing phenomenon. It is the wave of the future, and you should be riding it.