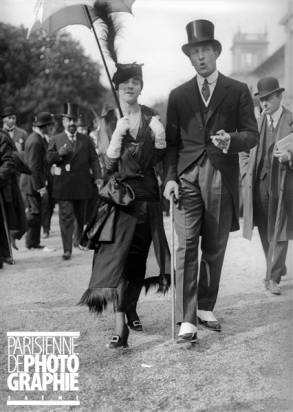 This is a photo of a Parisian couple, walking around the Longchamps hippodrome on May 17th 1914 (photo by Paris en Images). It has no link whatsoever with the content of this post – my favorite readings of May 2014 – beside the fact that it was taken exactly 100 years before I tweeted about the ESCP Europe Spring Research Camp. But I just thought it was a cool illustration, showing Parisians in style. Parisians still have style.

Thanks @MaelRoth for sharing this great TED talk. “Are athletes really getting faster, better, stronger?” was recorded in March 2014, and in this talk David Epstein (reporter who covers the “wide-open space” where sports, science and medicine overlap) explained that humans getting faster, better and stronger is due to many factors. The development of our natural talents is just one of them (doping might be another) but technological progress and better training are other factors. He has some very cool visualizations to proove his points.

This Fast CoDesign article displays three short documentaries about Japanese fashion designers Yuima Nakazato, Yujiro Komatsu and Yoshikazu Yamagata. These were made by the photographer and writer Todd Selby, who met these creatives while preparing a book (The Fashionable Selby) which documents today’s most creative minds in their work environments. As Fast CoDesign writer Carey Dunne explains, during the three years Selby worked on the book, he met a cast of characters that he thought would make excellent subjects for short documentaries of one day in their lives.

Another quote, same article "When patent lawyers become rock stars, it is a bad sign for where an industry is headed" http://t.co/cJsJBSpnRk

The above tweet was the second about the same article: “The Apple Chronicles” by New York Times Columnist Joe Nocera. His article talks about the patent war between Apple and Samsung (in which Apple is being very aggressive lately). Basically Nocera says that this patent war shows the the smartphone industry is falling short on innovation, which automatically leads to over-protecting their IP assets rather than to innovate. “This never-ending litigation is yet another sign that Apple is becoming a spent force,” Nocera says before citing a patent law expert at the University of California, Robin Feldman, who says that “suing each other is not what innovative companies do.”

While researching some illustrations of creativity across geography and across time (not only today) I found that the Nobel Prize ‘s website had a very neat Nobel Prize facts page. You can browse through all winners, since 1901, by field, university, gender, age etc. As shared in my tweet, the one visualization I loved is the interactive Nobel Laureates and Country of Birth map, in which you can visualize all laureates by field (physics, chemistry, medecine, literature, peace & economic sciences), by country and by date. For example, between 1901 and 1911 most laureates came from France and Germany, while between 2001 and 2011 almost all came from the United States. Very cool tool!

This was THE viral video of this month of May – as I write this, it has passed 40 million views. It shows the impact that using social media (and consumption of social media on our smartphones) has on our day-to-day lives and relationships. Gary Turk, whom you can see throughout the film, explains that “Look Up is a lesson taught to us through a love story, in a world where we continue to find ways to make it easier for us to connect with one another, but always results in us spending more time alone.” If you like The Streets, you will likely like this video too. I loved it.

That’s one of two viral Coke add that came out this month (the other one being this one). Even they take place in different locations, Singapore and the United Arab Emirated respectively, both are based on the same creative idea that migrant workers are living far away from their families and that Coca-Cola can help make their lives happier (…). The Singapore add is actually more touching because it shows locals addressing thank you messages to the construction workers who build Singapore every day, the “invisible workers” from India, Pakistan, Bangladesh and other nearby countries. Of course it’s acted, and the authenticity of these initiatives is always quite limited, but here I feel the message is very positive. I liked the video.

I will present a research project at the ESCP Europe Spring Research Camp 2014, on June 9th in London. I’m looking forward to meeting many of the people who appear in my research papers’ bibliographies, and hope to get some useful feedback about a paper about creativity and this. It’s always quite impressive to meet seasoned researchers and to get their impressions on your work, but I’m  hopeful that it will help us improve our paper eventually. I’m really looking forward to this conference, and the couple of days I will spend in London before.

This is a very funny set of graphics by Tyler Vigen, a criminology student at Harvard Law School. On his website Spurious Correlations, ha published a set of graphics that show how totally unrelated phenomena (the number of people who drowned by falling into a swimming-pool & the number of films Nicolas Cage appeared in,  the per capita consumption of cheese & the number of people who died by becoming tangled in their bedsheets…) correlate over time. A good way to explain that correlation, any broad class of statistical relationships involving statistical relationship between two random variables, does not necessarily imply causation, a relationship that describes and analyses cause and effect.

This is just a very cool photo of the Place de la Sorbonne! If you ever visit Paris, feel free to drop me a note and I would be happy to show you around (even if – unfortunately for you – the Sorbonne is not open to the public, only to students).

If you don’t know Jens Voigt (@TheJensie), you have to watch this. He’s a German professional bike rider, one of the oldest still active professional bike riders actually. Beside his legend breakaway wins, his sacrifices for teammates, his frank tone on Twitter, the one thing he is famous for his “Shut Up Legs!” It has become a cycling meme, and this Bicycling Mag video tells that he trademarked the expression now.

"Here I got some White House M&Ms for you" https://t.co/Iv6C7nBOWp

This week, President Obama decided to talk a walk around the White House. Social media savvy as they are, the communication folks of the President’s office turned it into a video, and put in on YouTube. Of course it buzzed, as it just passed 3.5 million views as I write this. Imagine this in France. I think  Président Hollande – who is definitely less cool than President Obama – would get only smiles and selfies with tourists.

In this article, Forbes contributor Ben Kerschberg compares the contemporary rise of open innovation initiatives with the five contests launched in the early 1400’s by Florence’s Wool Merchant Guild for the construction of Santa Maria del Fiore (il Duomo). “While Florence’s Wool Merchant’s Guild understood the power of contests as early as 15th century, today’s enterprises have to a large extent left untapped the world’s greatest business resource – the ability to go beyond one’s corporate walls and limitations to tap into world-class expertise in Budapest, Kyoto, and San Francisco, all from one’s office in Kansas City,” he writes. “[A Blind Enterprise] believes that by some miracle, it has the world’s best talent, collectively, inside its four walls. This will never be true.“