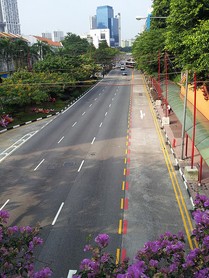 In October, which I spent in Singapore for work, I read and watched a couple of interesting things (note that I changed this series from “My Favorite Readings…” to “My Favorites …” because I’ll feature more images, videos and interactive sites rather than just articles from now on).

One of the articles is a great Foreign Policy article about Singapore’s electronic surveillance policy, explaining how the government is watching Big Data to “protect national security [and] engineer a more harmonious society.”

Other topics include articles about the specificities of the academic job market, a start-up innovation program launched by Coca-Cola, a documentary about the creative brief, a cool creative filmmaking project launched in 3 world cities (including Paris), Google’s latest investment and more.

How is the academic job market different from the corporate one? This article gives some very interesting insights about the quite frustrating length and difficulty of the process of getting hired as a professor in academia. “It’s worth understanding the Byzantine process that Ph.D.s of almost all disciplines go through in their attempts to get jobs doing the things they went to school to do,” Rebecca Schuman explains, “The academic job market works on a fixed cycle, and according to a set of conventions so rigid that you’d think these people were applying for top-secret security clearances.”

John Poindexter, one of DARPA’s then-senior program directors and a former national security advisor to President Ronald Reagan, was experimenting with harnessing enormous amounts of electronic information and analyze it for patterns of suspicious activity — mainly potential terrorist attacks — a system he called Total Information Awareness (TIA). This article nicely explains how the US had a very tough time implementing this type of system (Edward Snowden’s whistleblowing being one of the ways the public got informed about it and rejected the idea massively) and how Singapore – a culturally tight country – is actually managing to do it. “Singapore is testing whether mass surveillance and big data can not only protect national security, but actually engineer a more harmonious society,” the header of this Foreign Policy article says.

Do you have 30 minutes in front of you and do you share my interest about creativity? Watch this short documentary, which I discovered through PSFK. The agency Bassett&Partners; produced a short, nearly half-hour documentary titled “Briefly” capturing the informed thinking of various top creative experts including architects Frank Gehry, David Rockwell, Yves Béhar and others. Throughout the documentary, these experts weigh in on the definition, purpose of the brief, and how it applies to their line of work.

David Butler, Coca-Cola’s vice president of innovation and entrepreneurship, announced the launch of a new entrepreneurship program – called the Coca-Cola Founders program – a way for startups to gain access to Coca-Cola’s tremendous reach and for Coca-Cola to tap the ideas of independent entrepreneurs. The company goes into startup communities around the world and hand-selects founders, giving them insider access to Coca-Cola’s assets and its challenges. “We’ve designed a new way to create startups” Butler explained, one that will help grow Coca-Cola by churning out new products and services faster and cheaper.

Launched this autumn, Crop The Block is both a website and a collective of video artists from Paris (but also Berlin and Sao Paulo, as you will see on the site). “At Crop the Block, we adore Paris” declares the team on the website. The Crop The Block ethos is the promotion of “a vibrant Paris, where each district has its own life, style and personality.” Almost the totality of the site’s homepage is taken up by a plan of Paris, with the videos currently produced dotted across the entire spread of the city. Clicking on one of these dots launches the video, and also displays a section which allows intereaction between visitors and film makers. Filmmakers who choose to join the community become ‘croppers’, with their work being promoted by the collective both on the site and to potential external clients. A cool project as I think.

"Having a PhD perfectly qualifies you for any industry position. When you strip a PhD down, it’s really just a degre…http://t.co/ba8S1Y35Hc

To build on the very first tweet of this post, here’s one written by a PhD who found it (too) hard to decide for a career in academia. Instead of seeing the tough way to a corporate career with a PhD as a problem, he decided to write something about the advantages of PhD above other candidates. “The problem is that very few PhDs know how to leverage their PhD. Most of them just expect that world to be given to them on a sliver platter,” he explains. “If you have a PhD or are on your way to having one and you’re reading this, the future is yours.” Read on to find out these 7 advantages. I believe his article has a lot of truth in it, and the most important learning is probably that people with a PhDs still have to work on themselves and exert effort to build a great career – things won’t just come your way easily!

These Germans are creative! – Life Is Too Short To Do What You Hate http://t.co/XW0rt3AnIm pic.twitter.com/hDDrOMJxEM

This is a cool set of advertisements for the German job-hunting website Jobsintown. The company’s playful visual representations of their slogan “life is too short for the wrong job” were designed by scholz & friends berlin, feature human workers  powering everyday machines: a hardworking woman lives within every laundromat machine, scrubbing at your clothes… In an era in which we get scared about robots taking our jobs, I thought that was a fun campaign that plays on these fears… even if it dates back from 2006!

"@magicleap's glasses project their image right onto their wearer's eyes — and apparently to some stunning effects" http://t.co/BB6TT1ZeCX

This is huge news: This week Google led a huge $542 million round of funding for the secretive startup Magic Leap, which is said to be working on augmented reality glasses that can create digital objects that appear to exist in the world around you. Rather than displaying images on the glasses or projecting them out into the world, Magic Leap’s glasses reportedly project their image right onto their wearer’s eyes. The funding is coming directly from Google itself — not from an investment arm like Google Ventures — all suggesting this is a strategic move to align the two companies and eventually partner when the tech is more mature down the road.

Speaking French or German as foreign languages will get highest "language bonuses" http://t.co/2BRjwIvzyL http://t.co/yjX4Ax5OnV via @bogers

Which foreign languages should Americans speak to have the best return on investment? Albert Saiz, an MIT economist, found quite different premiums for different languages: just 1.5% for Spanish, 2.3% for French and 3.8% for German. This translates into big differences in the language account: your Spanish is worth $51,000, but French, $77,000, and German, $128,000. Read more in The Economist’s article about foreign languages.

Despite its modernity, Singapore has preserved its cultures & heartlands, mixing nostalgia &vanticipation http://t.co/G4c7Y0gP4o

Last, but not least, this beautiful video of Singapore. I think nothing can beat the description to introduce you to it: “Singapore is a rather small country. In fact, it is just a insignificant tiny red dot on the map. Despite this, Singapore has four major races living harmoniously in this tiny city-state, and is a well developed country. […] Tall skyscrapers, high-rise buildings, and everything modern can be found in this “Lion City”. Despite its modernity, Singapore has preserved its cultures and heartlands accordingly, resulting in a healthy blend of nostalgia and anticipation.” A fantastic timelapse project by Marklin Ang. Enjoy.