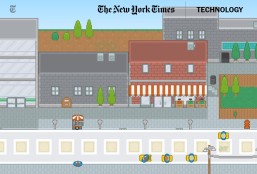 April was election month in France. But my favorite articles shared this month don’t contain politics, because (1) we yet have to elect our President in the second round, (2) I believe it’s pretty obvious whom to favor, and (3) I’ll try not to turn this blog too much into a political tribune. This past month, I’ve read great stuff about brand building in the tech world (Airbnb), in-app user behavior (Uber) and why Facebook & Google should freak out (Amazon).

“Marketing is not my way to do politics [..] I deliver real solutions that speak for themselves & benefit the people of Paris” @Anne_Hidalgo https://t.co/UrpR0DwIOP

“More walking, more bikes, more public transport—and fewer cars” this article‘s intro says. It is an interview – an article with quotes actually – of the mayor of Paris Anne Hidalgo. Like her predecessor, she is making huge efforts to turn the city into a greener, more sustainable and liveable city. I strongly, strongly agree with this vision and believe it is an absolute necessity, even though in is not easy for all those who live and work here. She agrees it’s not easy, but she puts purpose before popularity: “Instead of wasting time and energy trying to convince through an elaborate marketing campaign, I deliver real solutions that speak for themselves and benefit the people of Paris. And as a mayor of Paris, I am proud to deliver all my commitments to my people.” We’ll thank her in 10 years time!

"The broader question of how much Uber seeks to influence drivers [is] how much its business model requires it" https://t.co/vikTy7QoDs

A long, well-researched and very interesting article about Uber’s efforts to influence it’s users’ behavior through design. “Uber [is] engaged in an extraordinary behind-the-scenes experiment in behavioral science to manipulate them in the service of its corporate growth” the article says, based on dozens of interviews with current and former Uber officials, drivers and social scientists. “Uber’s innovations reflect the changing ways companies are managing workers [whose] lack of control can wreak havoc on a service whose goal is to seamlessly transport passengers whenever and wherever they want.“

"Adoption [needs all] to sign on the #blockchain to make this work: brand, agency, DSP, exchange & publisher" https://t.co/sFoBU4yw5d

How can digital advertising, whose business model is based on tracking & performance data that is rarely accurate, use the blockchain technology? Some examples in this article, including “Adchain” (to tag a piece of creative, figure out whether it was seen, who saw it, where it actually ran, track  conversion rates and how budget was spent along the chain) or the New York Interactive Advertising Exchange (to let digital ad inventory be sold using blockchain technology). If innovation continues, if more emerges, and if the industry adopts it, then it can be a huge improvement!

"As much as they've tried Facebook & Google have never been able to turn their platforms into shopping destinations" https://t.co/APRG0dda6d

Amazon has taken time to build a viable business, it has continuously innovated and communicated very well about it. Robots, drones & connected order buttons are among the most recents innovations that have received much coverage. But much like Google has built an empire on a highly profitable business line (online advertising), Amazon has done the same in other areas (online shopping, web hosting, crowd-work). This article explains why the players of the ad space should be careful about Amazon too: “Advertising online is both about attracting eyeballs and understanding where they’re coming from. Amazon has been logging away massive amounts of data on its customers’ shopping habits for years, and it rules the e-commerce market.“

"The value of #brand is hard to explain to people who think in terms of spreadsheets & finance" https://t.co/fgWIaFioTf

Airbnb’s current CMO comes from Coca-Cola, and many of the platform’s marketing executives across the world come from the FMCG sector. This article reveals that, while these peoples’ skills and experience are highly valued and needed, the tech sector (founders? investors? staff?) probably needs justification for high marketing spend and advertising efforts. Airbnb and its agency TBWA\Chiat\Day have commissioned a study to explain why it’s worthwhile investing in the brand, and Fast Company’s interview is a useful read about it : “Last year we hired a new CFO, and [we needed] to explain the value of a brand using terminology and language that people who sit on finance teams or are investors could understand.“

“They get technology [but] don’t talk about digital [because] it’s the starting assumption for everything they do” https://t.co/aP32ElWPt5

Marketing today is increasingly digital, and it doesn’t make sense (anymore) to see “digital” as a channel, a sub-CMO level role. This interview of Jake Sorofman, a research VP at Gartner who headed the firm’s CMO Spend Survey, is revealing as it points out how much the modern-day CMO is more empowered by technology than before. “CMOs take the lead or substantially contribute to digital commerce, customer experience, and innovation projects, and most CMOs now own or share P&L responsibilities,” he explains.

The core process behind [how] News Feed works & why each person is presented with the content they see on Facebook https://t.co/UaLuQOol9e pic.twitter.com/uP5F1q8tzA

Last, here’s a cool article about something we look at dozens of times a day: Facebook’s news feed, the social network’s main user experience. “Facebook held their annual F8 Developer conference [during which] the VP of News Feed explains the inner workings of the News Feed algorithm and how it dictates what content each user sees on Facebook. And with more than a billion people getting their news and insights from the platform each day, and with Facebook driving more referral traffic than any other source, this is key information to have.“

"Mr. Zuckerberg has done it again; he has neutralized yet another rival" https://t.co/iaJ4Mp7Qh4

Good post about Facebook’s strategy, by which the social network “neutralizes” the incumbents (Instagram was purchased, Whatsapp was purchased, Snapchat is being copied…) and succeeds doing so. “Sometimes the features turned out to be less important than initially thought, but that didn’t matter. At the very least he would neutralize his enemy’s growth, cutting it off before it became an existential threat to Facebook,” Farhad Manjoo writes. It will be interesting to see if/how the social network can resist Amazon, to echo the Mashable article above. You can also sell stuff on Facebook, so Zuckerberg is ready to take it on.