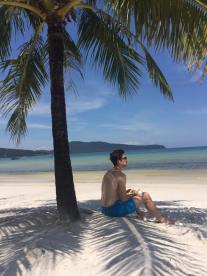 I originally started this blog to share thoughts, reads and conferences that I found worthwhile writting about. It turns out that my last book review dates almost 2 years back, so it’s time to write about books again! Just came back from 2 weeks of really relaxing holidays in Cambodia, a beautifull country that has much more to offer than the magnificient temples of Angkor.

I have spent quite some time reading – as I do under that palm tree on the picture – and I ended up wanting to write a blog post about 4 of the books I have enjoyed most during our holidays, 2 of which are about Cambodia’s tumultuous history. 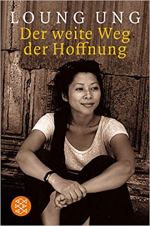 I read this book in German, to keep my language skills fresh, hence the cover in German to illustrate (in German, the book is called The long way of hope, but in English and most other languages it is titled First they killed my father). It is an autobiographical book written by Loung Ung, a childhood survivor of the criminal Pol Pot regime. She tells the story of her family and the harrowing things the Cambodian people went through in the mid-70’s, when the ultra-communist Khmer Rouge killed most of the country’s middle-class and elite (Ung’s father was a high-ranking police official).

It is the most well-known account of the Khmer Rouge years by a Cambodian survivor ; the story has even been adapted by Angelina Jolie in a film released in 2017. I neither want to see the movie not the trailer, because I want to keep my own imagination’s view of the unimaginable horror that Ung writes about.

It is a powerful reminder of the damages caused by the attrocities of war, and an implicit call for solidarity to mankind. In 1979, Ung and her brother Khouy were indeed the only of a family of 6 children (and, obviously, 2 parents) to be able to escape the country and get an education in the US… How many Ung’s are currently fleeing from Syria or Lybia to Europe, or from Honduras to the US?

This one only exists in French, to my knowledge. Memories of a forgotten war is a great book about the years that preceded 1975, the “Year Zero” of the Khmer Rouge regime that killed Ung’s family members and an estimated 1,7 million more Cambodians. It’s very interesting to get some context (especially after reading the book above) as it explains what happened between 1970 and 1975.

General Sosthene Fernandez was the commander-in-chief of the Khmer National Armed Forces and chief of general staff in 1970, prior to which he also was a prominent politician and a former chief of the police. In this testamentary book, published only quite recently, he explains how a combination of domestic politics and global geostrategical choices led the ultra-communist Khmer Rouge to take over a country in shambles in 1975.

General Fernandez left the country before the Khmer Rouge took Phnom Penh in 1975, and has lived in France until his death. With Mémoires d’une guerre oubliée, he wrote a book about a five-year period that is less documented than the Khmer Rouge years, but has still led to hundreds of thousands of deaths in the war to defend Cambodia against communism.

Read it more as a military journal, a testament by someone who unwillingly failed to protect his beloved country from extremists, and who wanted to give his own accounts of what led to such a catastrophe. 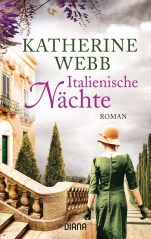 Here’s something much lighter. I found the novel The Night Falling (Italian Nights in German) in one of that shared book shelves that most hotels and hostels have in Cambodia. It transports us back in time, and back to Europe, as the plot takes pace in 1921 in Southern Italy, a time when the peasantry were struggling to survive in the face of the hostile indifference of the landowners and the brutality of the emerging fascist party.

It’s a love story between Clare Kingsley, English lady married to an architect who works on a project in Puglia for the wealthy landowner Leandro Cardetta. His nephew, Ettore, is a peasant who struggles to find work and feed his family with the meager income he earns. For him, like all the peasants of the region, it is a daily hustle merely to provide enough food, the days are spent out on the fields in gruelling labour.

I liked that – despite the horrible cover visuel – it is also a great book about the social difficulties that the Old Continent grew up into a mere hundred years ago. The tensions between workers and landowners were explosive, and Katherine Webb has found a way to weave this into a story that is sometimes unbearably violent.

Beside the historical aspect (another reminder that the epoch we live in is peaceful and prosperous, which we tend to forget all too often) I think this novel also underlines the destructive power of  ideologies in class struggles.

The Patriots’ Club (2006, by Christopher Reich) 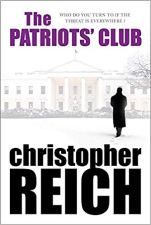 Also found on a hotel shared book shelf, The Patriots’ Club is a book that “inserts United States history into a modern thriller,” as a reviewer on Good Reads says. It’s the story of Thomas Bolden, whose youth has been difficult but who became a successful investment banker on Wall Street… until, in the blink of an eye, his world is turned upside down.

A bizarre kidnapping attempt, which he manages to escape, sends him and his girlfriend fleeing for their lives. Bolden’s employer sacks him for an offence he did not commit, his face is everywhere on the TV news, and he is being framed by a shadowy organization for crimes he did not commit. Thankfully, he finds allies – some of which are as shadowy as his detractors – who will help him understand and extract himself from the mess he has drifted into.

At a furious pace, through numerous short chapters, the book unwinds a complicated story in which official and unofficial power structures, push the main character’s to the limit. Reich takes the reader by the hand, not forgetting that few people know how Wall Street works, illustrating how perverse the ties between political and financial spheres.

Some impressions from Cambodia

Last, let me share some panoramas from the trip.

In one of the many Angkor temples

Goofing around at “Lazy Beach” in Koh Rong Samloen

The One Resort, also in Koh Rong Samloen

The beach in front of The One Resort

Cambodia is a beautifull country, people are kind and impish, the weather is as hot and sunny as you can guess from the pictures above. The infrastructures are still poor compared to European standards, but people live with dignity and we have always felt safe. Of course, in 2 weeks we have seen very little of this very diverse country.

If you travel to Siem Reap, I warmly recommend WILD Creative Bar & Eatery, a cocktail bar that makes marvellous, affordable spring rolls and cocktails, as well as the pricier restaurant Cuisine Wat Damnak, held by a French chef who proposes 5 and 6-course menus.