“We all benefit from sharing knowledge” I like to say. That’s why I initially started this blog, that’s why I keep it alive and blog on other platforms too. That’s also why I chose to share panel data a while ago, which I hope has been used by people to better understand motivations and willingness to engage in online co-creation.

Now I would like to offer 3 more opportunities to benefit from data I’ve gathered over the years – and that I’d hate to see sit idle on my hard drive: the Creatives In The Crowd data (map), the Crowdsourcing Timeline data (timelines), and the “eYeka Research Survey 2014” data (survey). You may use it for academic, market or trend research… truth is that I won’t be able to analyze it all. So let’s discuss!

It seems that social scientists share less data publicly than other disciplines. Add to that a cultural element which makes people from some countries & institutions less incline to collaborate openly with others or release control on their work. I would like too break the mold (that may be a slight overstatement) and propose all the data that I’ve collected in the last 4 years for analysis. In the spirit of openness and trusted collaboration, let’s engage in projects that could benefit YOU (you need real-world data?) and ME (I’m eager to learn!).

Let me describe the three data sets that I can share: 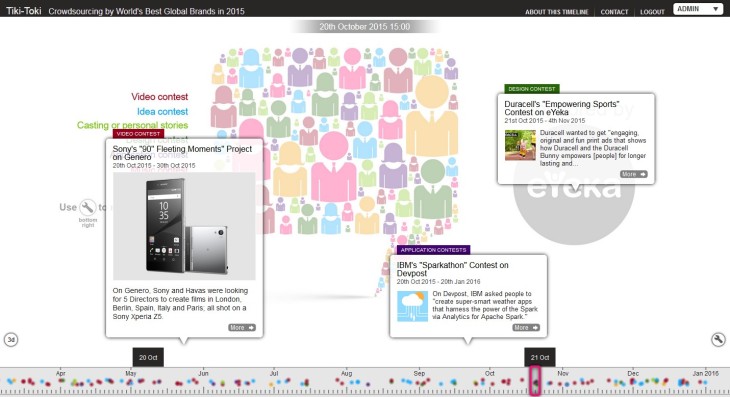 A screenshot of the 2015 timeline. To extract trends from this one & previous ones, get in touch!

I’ll start with a series of Timelines of Crowdsourcing by Brands, which gather all (I am doing my best!) the creative crowdsourcing cases initiated by the world’s most valuable brands in the last decade.  I started it in September 2012 with one timeline, but due to the high number of stories adding up over time, I had to split it into yearly timelines:

I have been constantly updating them with innovation tournaments, idea contests or branded websites for idea generation – initiated by the world’s most valuable brands (based on Interbrand’s Best Global Brands ranking) – that I found as I browsed the web in the last years. Browse through the timelines and you will see that there are lots of datapoints (over 850 stories to date) along with the types of contests, the brands, the platform, a short description of each contest etc.

The timelines contain over 850 stories along with contest types, brands, platforms and descriptions of each

I have used this data as a way to gain market knowledge and observe trends, as I did in late 2013 to document the considerable rise of video contests for example. These timelines have been covered by Digital Strategy Consulting, Brand-e or Innosabi, and they have also served as a basis for the 2015 Crowdsourcing Trend Report, which has been cited by Forbes, Marketing Magazine or Venture Beat. Interested by the data? Contact me.

The second visualization is a map, locating creative crowdsourcing participants featured by various platforms, called Creatives in the Crowd. I compiled various interviews of “featured creatives” on various crowdsourcing platforms, and listed them on this map. From eYeka’s “Creator of the month” interviews to OpenIDEO’s “OpenIDEATOR insight” series, this global repository can help researchers explore crowd members’ profiles, motivations and stories.

As I publish this post, there are 543 interviews listed, taken from platforms like Jovoto, Tongal, eYeka and other crowdsourcing platforms. Do explore the map (watch this Russian video for instance), see if you can get some intelligence from it, and get in touch if you’d like the raw data.

about attitudes, motivations and culture

Last, after defending my PhD, I am sitting on a bunch of raw survey data about peoples’ motivations and willingness to participate in crowdsourcing. It actually goes well behond that, and I surveyed eYeka members on a bunch of aspects, like their attitude towards our contests’ brands (Yoo & Donthu, 2001), towards the creative brief (Lutz & MacKenzie, 1989), towards the platform in itself (Christodoulides & al., 2006, 2009), peer pressure (Mathieson, 1991) or their culture (Gelfand & al., 2011).

I surveyed eYeka members on a bunch of aspects like their attitude towards the creative brief, peer pressure or their culture

I don’t think it’s worth elaborating more as only specialists will know what we’re talking about here. But know that I have 1,200+ complete responses from 80+ countries and – in the collaborative spirit of open innovation – I would be happy to share it to help both you and eYeka. The aim is to allow you to get high-quality, real-world data from a highly controlled environment, and us to learn beyond what we can process. Interested? Send me an email.

Here are a couple of blog posts about crowdsourcing, co-creation and/or open innovation that I updated on a regular basis. I did that for fun and because I like to gather data in synthetic ways, but have stopped updateing them since late last year. If they can help anyone for research, that’s cool too!

A couple of blog posts about crowdsourcing, co-creation and/or open innovation