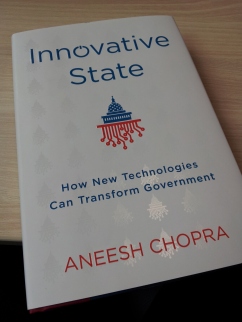 Aneesh Chopra was the first Chief Technology Officer (CTO) of the Unites States government, and served in this position from 2009 to early 2012. Since then, he has run for the office of Governor in Virginia (but has not succeeded) and created Hunch Analytics, a company which crunches public and private data to “help executives and industry leaders in health care, education and energy to make smarter business decisions.” But this post is not about the latter, it’s about Chopra’s experience as the USA’s very first CTO, and his vision of how technology can improve governments.

I enjoyed reading Innovative State very much, not only because it mirrors some of the phenomena I study in academia, but also because it reminded me of Gilles Babinet‘s book about his experience as a digital champion in France (disclaimer: Gilles Babinet is co-founder and board member of eYeka, where I work part-time). While Babinet had a much more consultative role, Chopra was leading the action in the White House – which also shows how seriously digital technologies are taken in France (not a lot!) compared to the US. Anyway. His views on how new technologies can transform government, shared in Innovative State, are highly interesting. According to him, four priorities (open data, impatient convening, challenges & prizes and attracting talent) should drive the US’s agenda toward becoming “a 21st century government that elevates the role of everyday Americans.“

“In September 2009, President Obama released his Strategy for American Innovation, which called for agencies to be more innovative through the use of prizes and challenges. In September 2010, the U.S. General Services Administration launched Challenge. gov; and in January 2011, the President signed into the law the America COMPETES Reauthorization Act. This gives all agencies the broad authority to conduct prize competitions to spur innovation, solve tough problems, and advance their core missions.”

This quote is not an excerpt of the book, but of our crowdsourcing 101 article that appeared in HPP in 2013, in which we explained how crowdsourcing can help speed up and enhance social marketing and health communication. Our article is quite short, to be honest, but what I’d like to show here with this quote is how agressively the United States are pushing challenges to innovate, compered to France for example, and how crowdsourcing is a tool that is seen as an opportunity to solve public problems. It’s one of the topic’s leading academics, Daren Brabham (University of South California), who brought Innovative State to my attention, with this tweet:

I got myself a copy. The cover looks great, the branding is sharp, and the opening words are “Government doesn’t work.” Chopra explains that public service has not always not worked in the United Stated (in fact he gives many examples of innovations that came from the public sector) but that the massive, hierarchical bureaucracy has emerged in the 20th century as a reaction to the massive, powerful corporations that made up the power of the United States.

Since the 1960s and 1970s, he explains, trust in government has plummeted (“many citizens began to identify an inverse relationship between its size and its effectiveness“). In the 1980s, Reagan famously said that the government can’t solve problems, but that goverment is a problem in itself. In the late 1990s, well aware of the inefficiencies of the US public institutions, the Democrats led by Bill Clinton and Al Gore decided to tackle the problem.

Watch this video of Al Gore, the US Vice President, talking about the issue on prime time TV:

This was meant to mock the complex federal procurement standards, and to raise public awareness about the fact that reforms were needed (we have silly standards in Europe too, and it does cost a lot of money until today). I know I’m taking shortcuts, but basically after 9/11 the focus shifted away from rationalizing government functioning, and drifted towards foreign policy. Long story short, the US government is still a big and costly institution, and Chopra’s book is about using technology to tackle that:

The purpose of this book is to show how we can be true to [America’s tradition of solving problems with the latest in organization & technology] by remaking American government one again (p.26)

[Obama’s vision was that] every American will be able to hold Washington accountable for [the government’s] decisions by going online to see how and where their taxpayer dollars are being spent (Barack Obama, cited on p.59)

In the two following chapters, Chopra explains how he got to the White House, from his parents native country (India) to Jons Hopkins University (Baltimore, Maryland) and Harvard University (Cambridge, Massachusetts). He then worked in the private sector for a couple of years before becoming the fourth Secretary of Technology of the State of Virginia, where he led his first projects to improve public service. His mission as White House’s first CTO began in April 2009 (read Tim O’Reilly’s post).

His first steps were not easy… 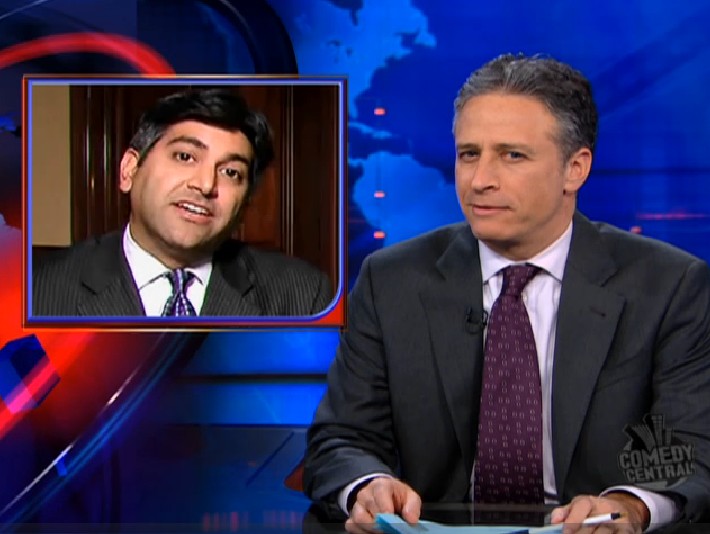 “What is so funny, Indian Geaorge Clooney?” (click to watch video, it’s 06:19 long and quite funny)

The video doesn’t only make fun of Aneesh Chopra’s nervous laughing during a White House live stream, an “endless, uncontrolled cackling” as he says himself (p.65), but it also mocks an example of the government’s missed efforts for transparency, a leaked security manual for contractors from the TSA (Chopra doesn’t talk about the leak in the book). “Chicken soup for the soul of terrorists,” Steward says. But that’s anecdodal.

Later in the book, Chopra explains how he met Henry Chesbrough, who coined the term “open innovation” in the academic sphere, in the fall of 2011. Before speaking to Chesbrough’s class, they discussed now well-known examples of open innovation in the corporate world (P&G’s Connect+Develop and the likes), and Chopra explains that he saw many parallels with what he did in Virginia, and what he wanted to do in the White House:

I was struck by how much this philosophy of [open innovation by] looking and getting beyond boudaries animated a view that President Obama had articulated in shaping our open government vision (p.84)

[I think] that the open innovation model, so effective in the private sector, also work in what Chesbrough dubbed “the mother of all services,” the government (p.86)

Chopra thought that the government, being a tool for citizen, should adopt a similar approach to some successful companies of the private sector. Why not launch challenges and partner with external stakeholders like P&G did? Why not build a platform for creative citizen to play with public data? Before leaving the CTO position, Aneesh Chopra wrote an in-house memo for President Obama, and released a public version of it called the Open Innovators Toolkit.

Check out the video below, published in March 2012 on the White House’s YouTube channel:

One of the avenues suggested to make better use of taxpayers’ dollars and increase efficiency of public service is to use challenges and prizes, as we said already. Did it work? In May 2014, the White House brought out a report about the government’s first steps in organizing prizes and challenges. It says that by September 2013, Challenge.gov had featured more than 280 competitions from over 45 Federal agencies, departments, and bureaus, nearly half of which focused on the development of applications and many of them were based on the exploitation of public data.

The health sector remains the prime area of ​​organizing competitions, the second being that of energy, which seeks to improve the energy efficiency of cars or to improve energy efficiency in general to reduce costs.“This look at the expanded use [of prizes and challenges] in fiscal year 2013 […] indicates the ways this authority will continue to help agencies across the Federal government reap the benefits of high-impact prizes,” the report’s summary says. One of the most active users of challenges is NASA, which just announced a new challenge to build climate applications based on satellite data.

The White house keeps innovating. After opening data up to citizen and launching prize challenges, the US State now embraces the “maker” movement (click to find out more)

While France has experimented with Open Data, to my knowledge this is all our State has done among the propositions of M. Chopra. Not that all solutions apply equaly to all countries of the world – I wouldn’t say that – but it is still striking to see that the world’s biggest moving economy is moving so fast while a European country like ours is tumbling along, (too) slowly embracing the digital economy, hindering many innovators to participate in the citizen efforts that Aneesh Chopra describes in the book.

But, M. Chopra, I would have one question for you

You say that prizes and challenges allow to better employ taxpayers’ money and rationalize State expenses. But haven’t you been faced to criticism from worker unions which felt threatened by these expense rationalizations? Have there been people who said that you were outsourcing the work of federal agencies to tax paying citizen? That you were encouraging spec work by facilitating competitions? I have the impression that in France, if we implemented a lot of the programs you describe in the book, such criticism would arise.

Update from a couple of hours after publishing the post: