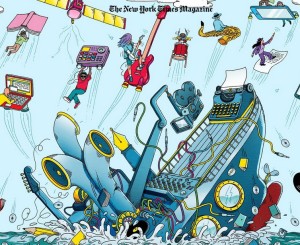 “The Creative Apocalypse That Wasn’t” (via nytimes.com, illustration by Andrew Rae)

August, the month of holidays, sunshine, nature and sports… right? To me it was all of the above, but I also read a couple of very interesting articles, watched debates and opinion pieces. In this month’s favorites you will find a single article about cycling (!) and many more about creativity and innovation, marketing challenges and tolerance.

Yes, tolerance. I translated the short position piece of a German TV anchor, published it on this blog and on YouTube, and was stunned by all the hate comments that it received. After the surprise, and thinking about it, I see it as a sad manifestation of trolls’ and racists’ hopelessness. I prefer them to just comment under a video than to represent me in our parliaments and institutions. Anyway, here are some much more interesting things to read and watch. I hope you’ll like them too.

American pro cyclist Phil Gaimon writes a nice, honnest post about on the thin grey line between the ethics and the legality of the rules. What does it mean to be a clean bike rider? Not getting caught doping? Not taking prohibited substances? Not taking anything that helps training and race performance? He has his answer.

"[P&G is] behind Unilever when it comes to making sustainability a key message. They aren't communicating creatively" http://t.co/CP7JO6T2CX

P&G has a new CEO, David Taylor, who just took over after A.G. Lafley left the FMCG Giant for the second time. In this article, Marketing Week writes about some of the challenges that he will face during his upcoming tenure, from new product ranges tocreative advertising and questionable marketing (“They’re quite a bit behind Unilever still when it comes to making sustainability a key marketing message. They are doing a lot of positive things but not communicating them creatively – that will help them justify their pricing” says Ian Bell, head of homecare research at Euromonitor International).

“We have unbelievably high brand awareness globally [but] it’s not clear [to consumers] why they should harness it" http://t.co/xeh6wZSpSU

Same website, same topic, different brand: Twitter. As Twitter’s CFO is in charge of marketing, a lot of people say it could do a better job at marketing itself and finding a clear positioning among other, bigger and more dynamic players. The MW article is interesting because it talks about Twitter’s “marketing issue” which is that people don’t know how to use it: “We have unbelievably high brand awareness globally. People all over the world know of the power of Twitter, but it’s not clear why they should harness it themselves. An answer to ‘why Twitter’ must be articulated clearly and felt everywhere through the service,” CFO Anthony Noto said on a conference call following its Q2 results announcement.

On August 7th, on the German public-service television network ARD, Anja Reschke made an important 2-minute statement against hat speach on the internet, which is becoming increasingly commonplace and could lead to real-world violence if it’s not countered. “Now, you could say that ‘There will always be idiots, just ignore them!’ But these are not just words, and the arson attacks on refugee centers are a reality. Hate speech on the internet have already triggered worrying group dynamics, as the number of right-wing violence has risen. This has to stop.“

Interesting article about how @McLarenF1 works for – and actively pitches its services to – global companies http://t.co/sKVLq6ISpa

Instead of using your cutting edge technology & know-how just to make cars faster, why not also apply it to toothpaste production or bicycle design? This is what this great Wired article, first published in the August 2015 issue of Wired magazine, is about: “McGrath and his team had visited the toothpaste factory in Maidenhead in November 2011. After studying the factory’s working methods, they figured out that a production-line bottleneck was occurring during the so-called changeover: transition periods […]. For McGrath, the similarities with F1 pit stops were obvious. ‘If I can change four tyres on a car in two seconds,’ he questioned, ‘why does it take me two hours to do a changeover in the toothpaste factory?’“

"I do not believe there is such a thing as a Western value" @DalrympleWill – Debatable assertion. Debated here: https://t.co/nFnuB6jqMT

My previous blog post is about some cool Intligence Squared (Intelligence²) debates, and here’s one that I was particularly interested in. William Dalrymple, arguing against the motion that “We Should Not Be Reluctant to Assert the Superiority of Western Values,” says that there are no such a thing than a Western value, that “Western” is already an interpretation of a basic value, which I tend to agree with. I actually found myself agreeing with most of the arguments of the side against the motion, but eventually I still think that, no one should be afraid of claiming certain values as his own, and no one should be scared of claiming that they are good! Great debate!

"I think the word digital should disappear. The money should go [where] our customers want to engage" (Nissam CMO) https://t.co/tJFQaNTT05

This is an interview of Nissan’s global marketing chief, Roel de Vries. After creating an agency within Omnicom, dedicated to the brand and called Nissan United, he expects that there will be even more integration in the future, and that in 20 years from now, cars will anticipate your needs and schedule your appointments: “In the media world there’s lot of data. [and] we also use a lot of data that’s coming out of our cars. We know what our customers do and what is their driving behavior. Based on that, we know we need to offer them tires because we know how many kilometers they’ve driven. In 20 years’ time cars will talk to each other.“

As web companies strive to tailor their services to our tastes, there's a dangerous consequence: a "filter bubble" https://t.co/Cr08a8j4b9

As web companies strive to tailor their services, including news and search results, to our personal tastes, there’s a dangerous unintended consequence: to get trapped in a bubble of personalized results and don’t get exposed to information that could challenge or broaden our worldview. That’s what Eli Pariser, the author of “The Filter Bubble,” argues in this short TED talk, saying that it will ultimately be bad for us and bad for democracy.

This is a fabulous article! Steven Johnson writes about the big four creative industries (music, TV, movies & books) and the way they have evolved in the “post-Napster era,” which was foreseen to destroy all the musical value chain, as Metallica’s drummer Lars Ulrich predicted. Johnson looks at data from avrious sources to see whether there are really less musicians, filmmakers, producers… and whether the creative productions are reall worse off today than 15 years ago. “Collectively, the figures seem to suggest that music, the creative field that has been most threatened by technological change, has become more profitable in the post-­Napster era — not for the music industry, of course, but for musicians themselves.” Many more interesting facts are in the article.

"I blogged for 3 or 5 or 10 years, depending on how you measure it, with almost no one reading my work" Seth Godin – http://t.co/D8ZjvkGtLJ

This is an interesting interview of Seth Godin answering questions by someone from Contently (“a technology company whose mission is to build a better media world” – as they describe themselves on their website). This guy expects a life changing conversation and says “that’s really interesting” all the time – which shows us he’s a big fan of Godin – but while it’s not life changing it’s certainly interesting. The only Godin book I read was Tribes and I loved it, it made me want to get up and do stuff. After reading this post, you’ll probably want to change a couple of things in your marketing and communication. Even though I doubt that Gillette will cut all its marketing spend just to launch a brand magazine, M. Godin.